I know I recently posted a bit on what I still believe is a ridiculous commercial in praise of television, but I thought I'd pass along a recommendation for a good series.  My wife and I are always game for a good detective show and so we were delightfully surprised when we discovered a British drama about a police detective in World War II Britain. 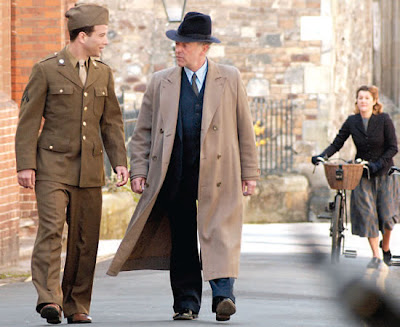 The show is called Foyle's War and still being produced by ITV in the UK.  They're now in series seven, with 22 episodes so far.  My wife likes the murder mystery aspect.  I enjoy the historical drama.  All good fun.  We're almost to the end of series one, so don't anyone spoil it if you've seen them.  The wonderful thing about discovering a series late is that the public library has a good number of these on DVD.
Posted by Nate Maas at 10:13 PM

The butler did it.

Thanks, Roger! I never trusted him, he just looked shifty.

hahaha...it's the butler's second wife's lover who did it!!

We also discovered Foyle's War late, but thoroughly enjoy the series for the same reasons you posted.
Have you ever watched "Firefly"? We discovered the series after it was cancelled, and became big fans of the show and the premise.

"Family at War" is a good tv series about a Liverpulian family living through WWII. The producers were punctilious about authentic details. (When possible they used props, costumes, etc from that period.)

It's strange but I never heard of "Family at War". I can't say I'm a huge fan of classic detective movies and monitor new ones constantly but I checked it on essay writing service ratings and this one looks good. Thanks for the tip!

New school year starts and students have to deal with their homeworks, essays and summaries as basis. Some students get through this on their own meanwhile others face difficulties. While some students still need to work homeworks take a lot of time and energy. Hence the question arises “Who can help me to write my essays?”. It's obvious that they'll want to apply to source like this https://rocketpaper.net/research-paper-for-students

Use our rephrase to change full length essays and articles or to find new ways to express simple phrases, sentences or single words. Whether your goal is to remix textual content for a website, term paper, business document, email or tweet, we will do the trick. Applications which stand to benefit from text rewritten by us range from expanding blog and website footprint on the web with quality content to facilitating brainstorming for any essay or creative writing project.

You might notice that on Scamfighter they place test orders with different sites to make sure that they have the most relevant information, and there is no place for mistakes. If you do not agree with their opinion, okay, go ahead and place the edubirdie reviews under their post or discuss it in their forum. An actual person manages the service and he can see all the complaints you submit, so he can send you an email or call you if you need his assistance. He hates guys who do that but, after all, no one can say that his reviews are fake!

look! write your question and wait time for a help! here you can find the answer on any topic for your scientific or homework. any student or professor around the world may answer it. https://edu-answers.com thanks

Hi, I am Keith CREW from Malaysia. I am working as a full-time academic consultant with valueassignmenthelp.
we providing Online Assignment Help online to university or students. I served the stressed students
residing in Malaysia for more than 5 years and hold excellent writing skills and provides
guidance to academic scholars and students. For More Info: Assignment Help online

Fantastic blog with amazing information, I really like your post, thanks for sharing. udusok cut off mark for medicine

This is a very notable blog with a well-written article piece, very impressive as it contains information that is unique to its own. It is really worth surfing through, as it contains an amazing read. ielts nigeria past question and answer pdf format