Well everyone, I'm home!  If you're a regular reader, you will know I was at Boy Scout Camp Emerald Bay on Catalina Island last week.  But I've been resting up and I'm ready to start blogging again.  To get back in the groove, I figured I'd give you a peek into our Troop's summer camp experience. 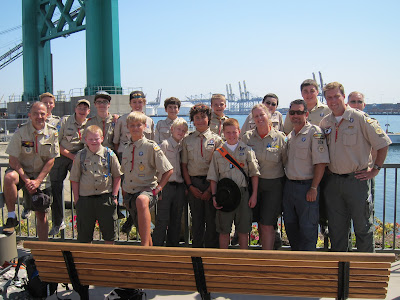 Our Troop Contingent – I'm at the front right

Although we have about 50 boys in the Troop, summer camp for us is kind of like an intro to the outdoors as we are an outdoorsy unit.  So although Boy Scouts is for guys ages 11 to 18, our group going to summer camp tends to be smaller and on the younger end.  I must say, it was probably the best summer I've had since I became Scoutmaster about five years ago.  The new group of boys are all great guys and their always positive attitudes and can-do spirit was really a pleasure.  I don't think I heard one unkind word all week.  It was kind of like being with a dream Troop. 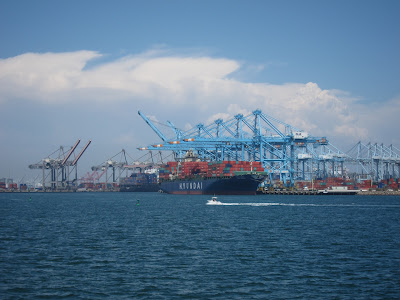 We left from San Pedro, California, and took in all the sights of the harbor. 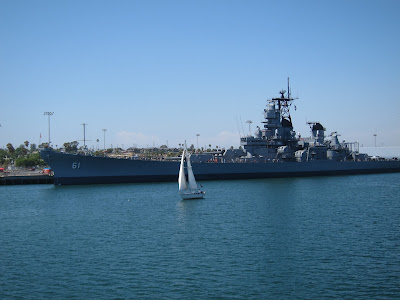 One pleasant surprise, which wasn't there the last time we went to this camp, was to see the World War II battleship, the USS Iowa, docked in the harbor as a museum ship. 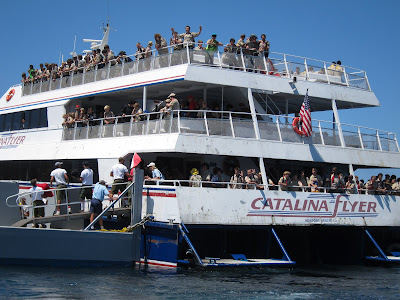 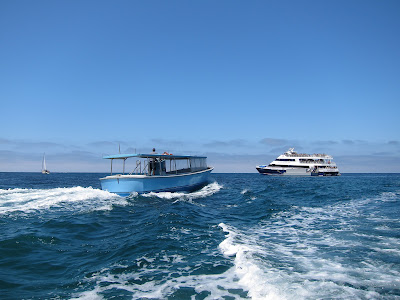 The camp contracts with a ferry company to take Scouts directly to camp.  This year, we were on the larger of the two ferries which meant that we had to take a water taxi to the dock as the ship stayed off shore. Camp Emerald Bay is probably one of the most deluxe Scouting camps I've ever attended.  It sits on a little cove towards the northeast end of the island. 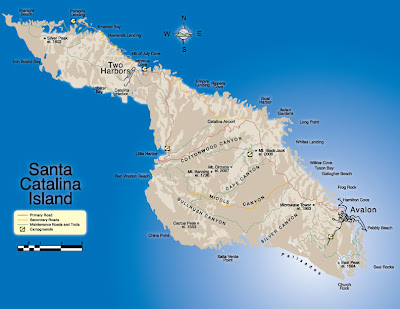 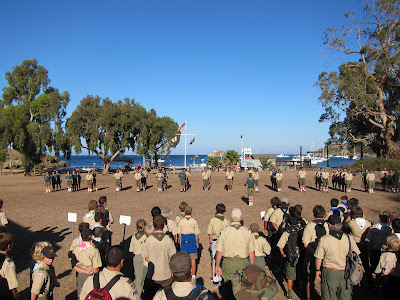 This year, we had the added benefit of being joined by my nephew Otto from New Mexico. 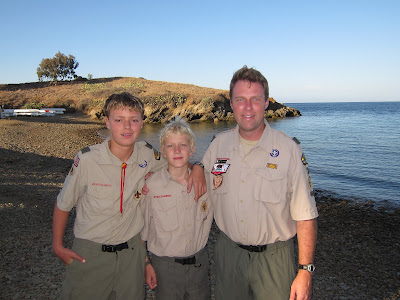 My son Andrew, Otto, and myself 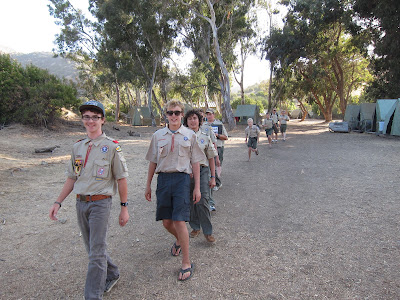 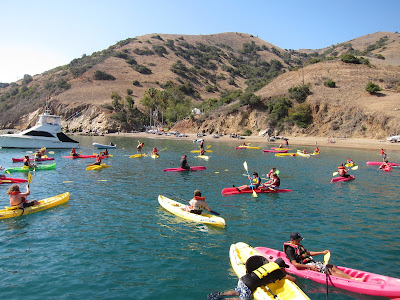 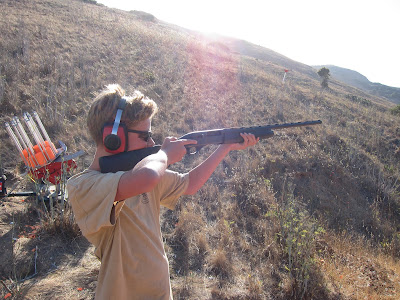 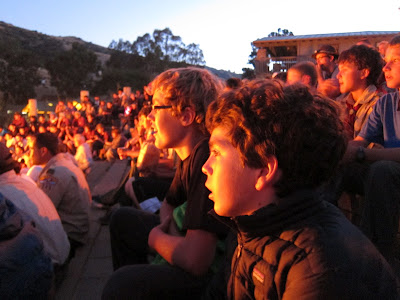 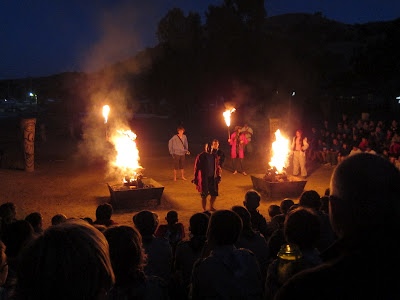 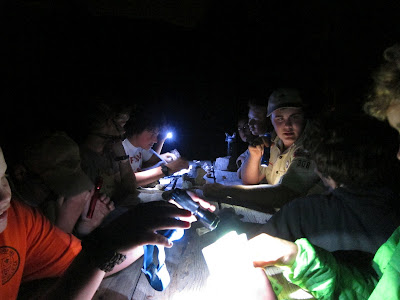 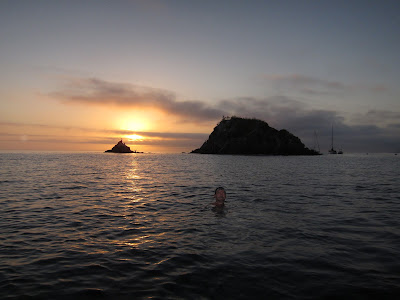 Tom on a sunrise swim to Indian Rock 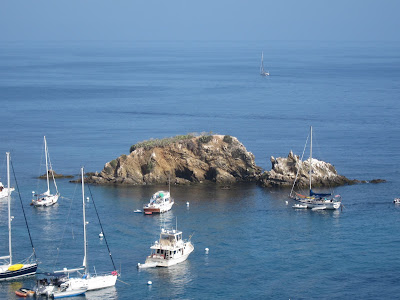 Indian Rock from another angle.
Can you see him lying on his back looking up at the sky?

Apart from the normal camp stuff, Emerald Bay offers a unique waterfront experience with some of the best snorkeling in our state.  This year, I brought an underwater point-and-shoot camera to take some shots of the marine life. 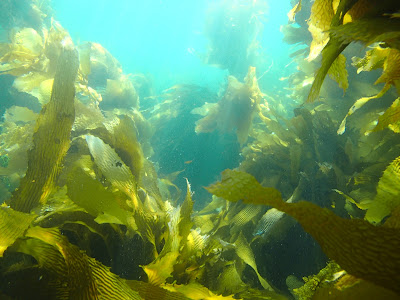 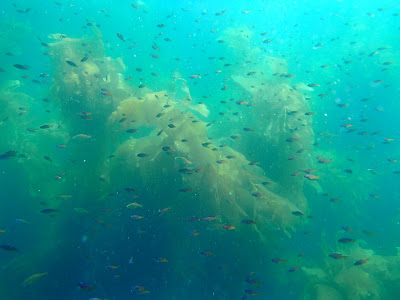 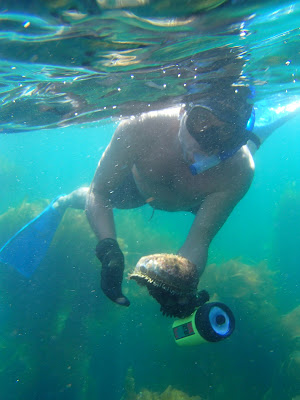 Tom with a good abalone specimen

Swimming through the kelp forests is one of the most peaceful experiences I've ever had.  It was fun seeing the harbor seals, fish, rays, lobster, abalone, eels, octopi, sharks, etc. 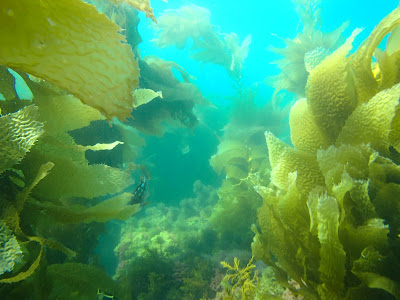 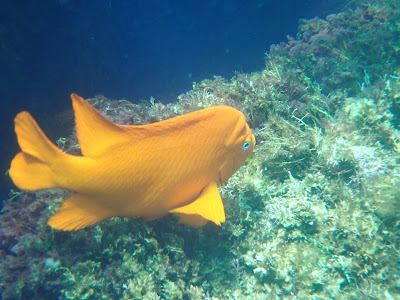 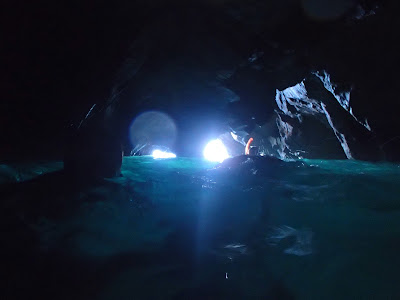 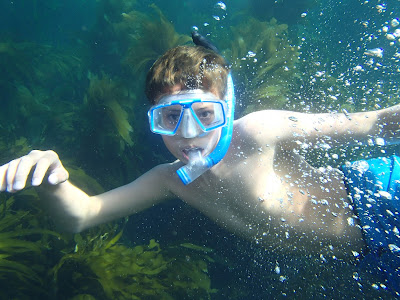 A couple of highlights from the week were rowing around the point from camp at sunrise with the boys to camp at Parson's Landing.  A good sized pod of dolphin came swimming by our canoe. 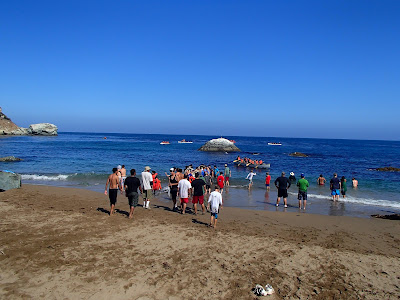 It was fun cooking on the beach and sleeping under the stars while listening to the crashing waves. 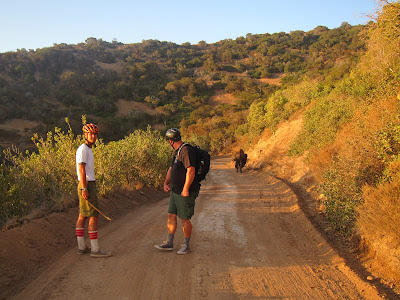 The bison who slowed our progress to Two Harbors 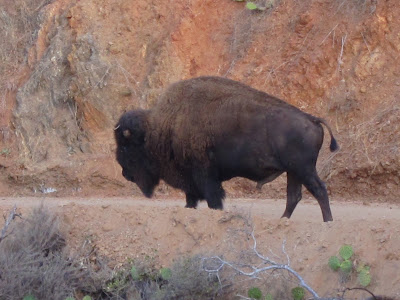 Bison are rather large animals

The final morning of camp, we decided to take an early morning seven mile mountain bike ride to the town of Two Harbors.  Our path was soon blocked by a bison who didn't want to move.  I figure we chased that beast about six miles trying to get him to clear off the road.  We eventually got to the town and had a quick breakfast before heading back to catch the boat home. 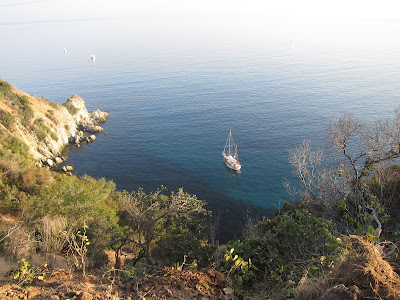 I'll have to come back.  On the way back, I spied a little cove that looked rather inviting.  So goodbye, Catalina.  Hope to visit again soon! 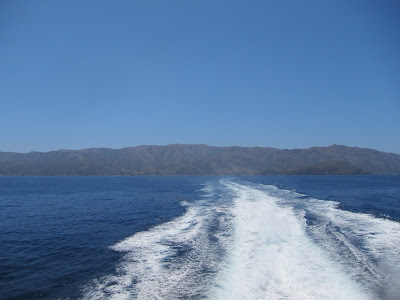 What a week! Thanks for sharing.

Bison love people.
The love to head butt them and squash them, and maybe even step on people.

Welcome back. Thank you for sharing your great summer.

Nice shots! I didn't realize California had such magnificent islands. It's fun so see there are still bisons around (being a movie prop isn't so bad after all).

I wish the Connecticut Boy Scout camps were so beautiful and exciting! Thanks for sharing!

Its a great pleasure reading your post.Its full of information I am looking for and I love to post a comment that "The content of your post is awesome" Great work. spring camps california

Summer camps provide an enthusiastic atmosphere to develop self confidence and self esteem. Summer camp rates depend on the type of activities, level of instruction, facilities and duration. These camps are held for kids, girls, boys, teens and families on separate dates. summer camp counselor jobs for high school students

Thanks on your marvelous posting! I really enjoyed reading it, you’re a great author.Please visit here:
Local Packers And Movers Bangalore