Another Reason Why I Can't Take TV Seriously

Long before we met and before she had settled on a college major, my wife desired to be a meteorologist.  (Side note here: does anyone else find it funny that we have the terms 'weatherman' and 'weathergirl?'  Why the age difference between the word genders?)  Anyway, as a result, I have ended up watching more Weather Channel and more weather reports on TV than just about anyone else in California.

Of course with Hurricane Irene in the news, and my wife with the remote, I watched more of the typical weather reporters braving the stormy elements, which to me all look like the same storm.  I always find it odd that they say things like, "This is a really dangerous storm!  We are not kidding!  Local authorities have ordered a mandatory evacuation of this entire area!"  Then to give you some kind of idea of how dangerous it is and the precautions you should be following, they ignore their own advice and send some poor sap to the most visually dramatic and probably dangerous area to start broadcasting. 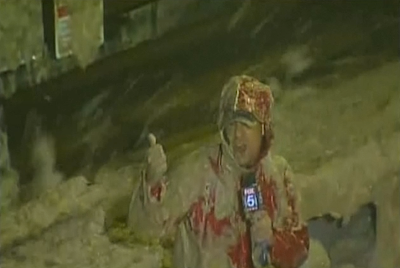 Up until now, I thought it was more like watching a less-funny version of America's Funniest Home Videos, but this last weekend, WTTG reporter Tucker Barnes was sent to cover the hurricane down at the sea wall in Ocean City, Maryland, where he encountered a foul smelling, and according to him, bad tasting foamy goo.  (Again, why send a poor fellow, knee deep in toxic sludge, right where he could get swept out to sea and show it on national television, unless you were trying to encourage stupid college guys to do something equally foolish?)

Apparently, the Ocean City Wastewater Treatment Plant is just around the corner from where poor Tucker was sent and they had shut off the power to the plant, so in all likelihood, the fellow was being slapped with untreated raw sewage.

How Tucker, his crew, and the news anchors couldn't figure out that going down to the shore during a storm and standing in foul smelling (oh, and foul tasting, thanks again Tucker) sludge, maybe wasn't the best of ideas is beyond me.

If you have the stomach to see the video, you can watch it HERE.

I watched the video, I'll bet after he found out what he was standing in, he spent some time in the bathroom "praying to the porcelain gods"
All I can say about it is YUCK, YUCK, YUCK, and that is not laughing

And then he had to walk through the hotel lobby and in the elevator and down the hall.
You would think the hotel staff would want to kill him.

I used to live in "hurricane country". I know that a storm of any sort can cause dangerous circumstances for those anxious to go out and take a look/see at local river bank or sea wall. The pictures of powerful water and wind are dramatic and interesting. By and large, though, the people that are in the path of the storms (the locals) are very well informed as to what to do to stay safe. Local officials are excellent at warning them, and everyone has a "weather radio" to follow the meteorologist's advice. Every NATIONAL channel devoting so much time to an "Approaching storm" is ridiculous to me. For those of us in earthquake country, it is comparable to the national news channels devoting lots of air time giving advice to the nation to remember to avoid using your cell phone after an earthquake!

Don't the French say "trois fois merde" when they wish lots of good luck? This fellow will have good luck till the end of his life.
Less luck will do for me.

I like how the weather guys and gals get excited when a big weather event comes around.

I watched way too much Weather Channel this weekend.

I'll never forget a while back when big Al Roker nearly got blown away form a storm he was covering. Funny stuff.

Here in the Northeast news stations do the same lame on the spot reporting. They often put a news truck and crew along a highway and tell people how slow the traffic is. Of course just the sight of a news truck, bright lights and camera crew tend to make people slow down and look.