Yesterday's Person-of-Mystery was George Washington Rains, younger brother of the better known Gen. Gabriel Rains.  Together, these two were known as the "Bomb Brothers" of the Confederacy. 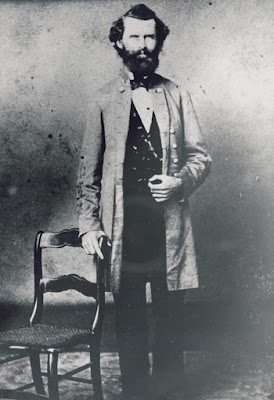 When the Civil War broke out, the South was unprepared for war.  Unbeknownst to most, was the glaring lack of saltpeter or sulphur mines anywhere in the Confederacy.  Potassium nitrate (commonly called saltpeter or niter) mixed with sulphur and charcoal was the primary method used to produce explosives before the war and the South was deficient in two of these critical areas.  With the North employing embargo and blockade, the Southern Armies were facing a critical shortage of gunpowder and with a tightening naval blockade, supplies were becoming increasingly difficult to obtain.  At one point, Jefferson Davis, was even quoted as saying the army only had enough powder for one month of light fighting.  Under the authorization of President Davis, Rains scoured the South looking for new sources of niter.  Utilizing his chemistry background, Rains discovered soil found in the limestone caverns in Arkansas, Tennessee, Alabama, and Georgia could suffice and to make up the shortfall in production, he even employed systems of trenches to collect human waste latrines in larger cities.

Raines converted factories in Nashville and Richmond into small powder works, but his greatest achievement was in constructing from scratch the Augusta Powder Works in Augusta, Georgia.  At its peak, the factory produced 7,000 pounds of powder in a day for a wartime total of 2,750,000.  Rains revolutionized the gunpowder industry and instituted safety reforms that dramatically reduced injury at his factory. 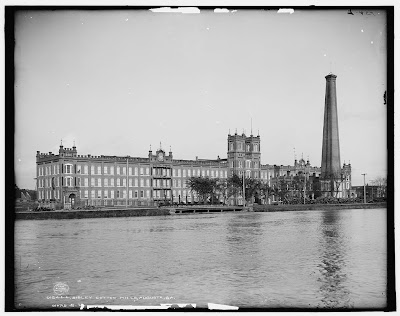 (Sibley Mill, Augusta, Georgia, after the war.  The chimney was part of the original Confederate Powder Works and survives today.)

The Augusta plant was the only official government structure constructed by the Confederacy and it continued to produce gunpowder until the very end of the war.  Following the war, Federal officials deemed confiscated Confederate powder to be of the finest quality. 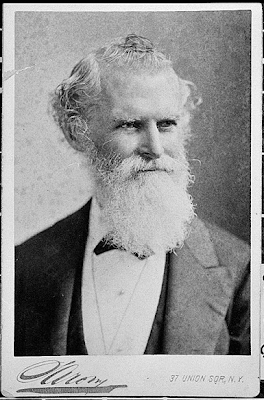 George Rains stayed in Augusta and served as professor of chemistry and pharmacy at the Medical College of Georgia until 1884 and eventually moved to New York State to start a new business in 1894 before dying there in 1898.

Apparently they consider the chimney to be an obelisk; a monument to remember those who died in the Southern Armies during the War Between the States (I guess mentioning 'Civil War' in the South is not appropriate, it is 'War of Northern Agression' or 'War between the States'). The obelisk is maintained by the Sons of Confederate Veterans, and I also read today that every US president still sends a wreath to the Confederate Monument at Arlington on Memorial Day.

Interesting bit of History. At the museum we have quite an extensive Civil War Collection. I must read more about the Civil War to fully appreciate all the artifacts:)

Rob, good catch. Yes, technically the American Civil War is not a civil war in the textbook sense (where two sides in the same country are trying to control the entire country). The Confederacy just wanted to leave and that's one of the reasons that most of the war is a defensive war. It goes by a number of names including a couple like "The War for Southern Independence" or the "Second War for Independence" that are probably more correct, but even though the "War Between the States" is used more often in the South, people in that part of the country will recognize what war you are talking about even if you just call it "The War."

Regarding Arlington, many don't realize it, but the property was the antebellum home of Robert E. Lee. It is so close to Washington, you can see the Capitol and many of the monuments from the front porch of the home (which is still at the top of the hill in the middle of the cemetery). The Federal Government sized the home and started burying soldiers there as a matter of spite, so that he would not be able to ever return to a working farm.

Yes I knew Arlington used to be Lee's home. It's a bit disrespectful. I believe Lee is considered a gentleman even in the North. But these things happen during wars I guess.

Better late than never. Your blog is great. I can add something about your blog on George Washington Rains. I worked at Mount Saint Mary College, Newburgh, NY on the property belonging to Rains' father-in-law and where Rains lived after marrying Frances Ramsdell.

Rains ran his father-in-law's iron works factory in Newburgh until Jefferson Davis called him back home.

He actually returned to Newburgh to lie out the rest of his life. He is buried in St. George's cemetery, Newburgh, right near the grave of his brother-in-law, Henry Ramsdell, who fought for the Union Army.

Unknown, thanks for your comments. I did not know about his being buried so close to Henry Ramsdell. Thanks for the additional information!