Following my earlier post on Burney Falls (and my designation as the prettiest waterfall I'd seen), Rob from Amersfoort questioned whether I had seen Niagara Falls and if I did if I liked them.  Well, yes, I have seen Niagara Falls.  I visited them without the family during the summer of 2005.  I was attending a historical conference in Pennsylvania and my wife was staying with the boys at her parents in Wisconsin.  Following the conference I rented a car and drove with a slight detour to meet up with them. 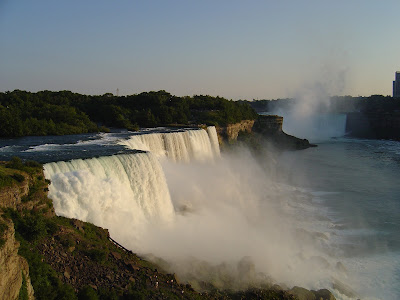 The American Falls at Niagara in 2005

The Niagara Falls are certainly magnificent.  It's a matter of personal opinion certainly, but I found Burney Falls to be more intricate and beautiful to behold.  It's in a much more natural setting and isn't as commercialized.  I saw both in peak season, but Burney Falls was certainly less visited.  Though we passed a few other people, we pretty much had the place to ourselves and you could watch the falls in solitude.  My experience at Niagara was that it there were more distractions around the falls. 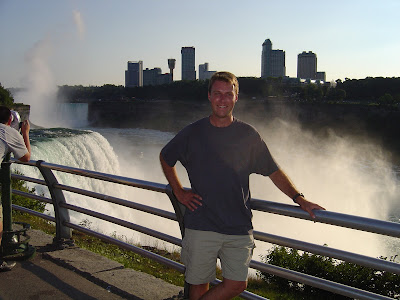 The viewing angles of Burney Falls were also a bit better.  Owing to the large amount of water coming over Niagara, the mist, while fun, prevented you from seeing the falls well up close. 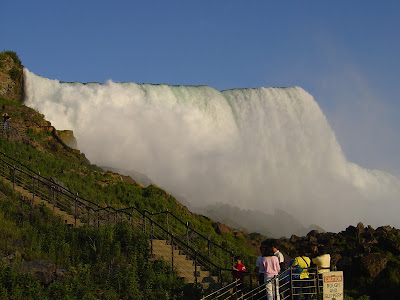 I did not take the time to see the falls by boat, which did seem like it would be interesting, but I thought the most fun (and free) viewing angle was from the top of the falls watching the water tumble over the precipice. 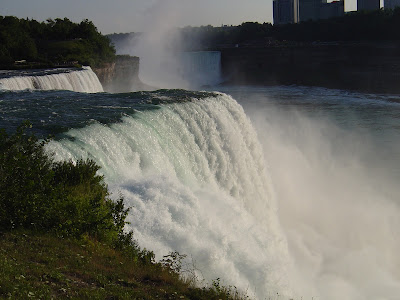 So, Niagara Falls still gets 9.7 stars on the Nate's Nonsense Waterfall Rating Scale, which is remarkably high, but slightly lower than the 9.9 rating for Burney Falls.

And I know you are all having a difficult time putting the height of the falls in perspective, so I've added Niagara Falls to the handy info graphic below: 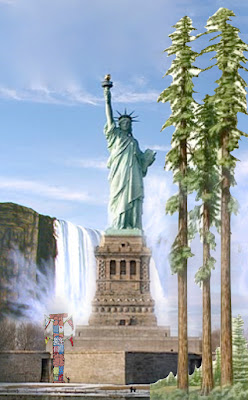 I just love how the infographic became a way to put things in perspective, well done :-)

I agree with you, Nate - the falls with solitude trumps the commercial falls.

If I look at your info graphic it looks like you're ready to start your own amusement park:

Nate's World, with everything that makes America big.

I’m going to read this. I’ll be sure to come back. thanks for sharing. and also This article gives the light in which we can observe the reality. this is very nice one and gives indepth information. Please coming soon link webstagram