Perhaps it's returning from the beautiful forested hills and lakes, or maybe it's because summer is going by too quickly for my liking, or maybe I'm just hitting middle age, but I'm finding more slight annoyances in life.  I returned from our camping trip looking forward to watching a little of the olympics, but I think I'm already annoyed. 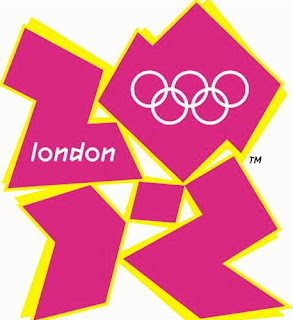 London 2012: Winning the gold for worst logo ever

There are of course plenty of things to annoy me.  Firstly, the logo is atrocious!  It reminds me of some kind of bargain brand soda logo from the 80s.  Then there's the font!  You'd think that they could have adopted some kind of updated neoclassical design, but the font continually assaults my eyes.

I feel like Max Headroom should be trying to sell me New Coke with this font.  And I don't care if the Olympic rings are round, it doesn't make the round O in this font any more hip.  As one columnist said, it's what the Brits call "dad dancing."  That is something akin to a middle aged man trying way too hard to still be cool.

But it's not just the Brits that mangled the Olympics.  What was with our outfits at the opening ceremony? 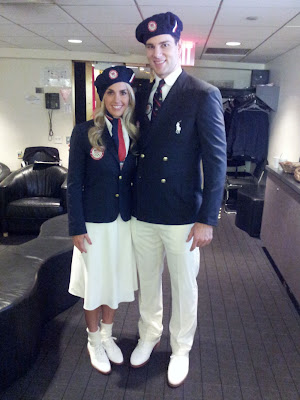 I suppose it matched the 80s throwback theme, but really berets?  Yeech!  Kind of like some kind of odd flight attendant uniforms from yesteryear.

And while I'm on my rant, here are a few other things that irk me... 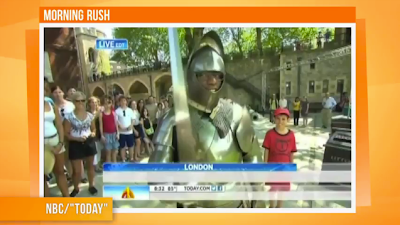 I don't like watching our goofy American network television hosts and now they've got them over in the UK being equally ignorant of British history, culture, and sports in general.  Perhaps it's just a TV thing, but it seems as though television keeps shooting for an ever lower mental age.  Another thing that bothers me is how the television broadcasts cut between events as though they were live or talk in a giddy excited fashion when the events have been posted half a day earlier on the Internet.  Just show the event in realtime and allow people to watch if they'd like. 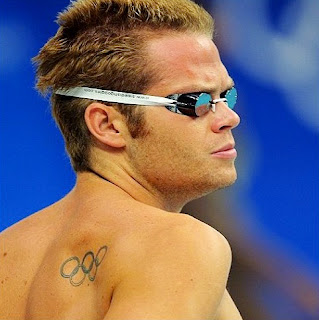 Maybe my discontent is just my noticing our degraded popular culture.  I still find tattoos rather trashy and it seems as though more and more of society is getting them.  That bothers me a little too and I've seen more during the olympics than I seem to remember.

Maybe it's time for me to just stop watching the olympics.  It certainly seems as though people have stopped attending them.  I do find it funny that Britain has enlisted the military to serve as seat fillers at the games. 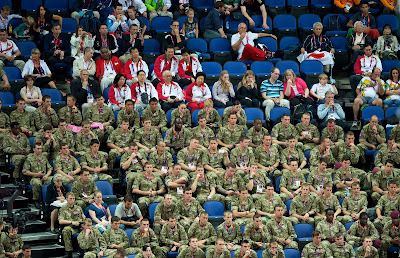 Someone should tell them though that camouflage only works if you look like your surroundings – they should have probably told them to come in civilian clothes as it would have looked more realistic.  I can only imagine what our press would have said if the Chinese had filled their stadiums with uniformed soldiers instead of the general public.

Well, thanks.  I think I have that off my chest.  I'll still watch the games, but thank goodness I have a DVR and can fast forward through much of the nonsense.

Max Headroom - AWESOME reference - I hate that font too and you nailed it!

Have you seen the cheerleaders?! First time I have ever seen that at the Olympics. We were watching men's indoor volleyball and noticed there were a ton of cheerleaders around the 'stadium'.

BOY, some one sure got up on the wrong side of the bed.

I too spent some time trying to figure out the logo. Was it suppose to be some one diving, running, jumping, I finally gave up on it. I didn't put much more energy into how stupid it looked.

I got real tired of the broadcasting real quick. I don't think I have watch more than 5 minutes total of the games so far.
I have looked at some photos of things and read some of the articles.

Yes to fill the seats with people in uniforms was about as bad or worse than the empty seats.

But, all in all I pretty well agree with your opinion

I feel your pain. I'm so tired of the commercialization of everything. I've gotten so jaded I didn't even watch the Tour de France this year.

Like Dadd said I read an article here and there and look at the pictures but that's about it.

About the logo, Since I am in the graphic arts industry I see crappy designs (IMHO) come across my desk all the time. I think the reason for this is the computer age. The graphics programs have gotten really good and it doesn't take too much to effort to learn how use the software.

Back in the day a graphic artist really was an artist not a computer operator. I think it shows in today's media. The sense of artistic style is missing because the human touch is missing from the equation.

I'm sure my comments could ruffle some feathers but that's just the way I see it. Same thing is going on in the music industry.

Take it from me, Nate, you're still a young 'un!
I know what you mean about our society, but
1) There is also lots that's really really good, that gets less publicity
2) In older times there was stuff that was really bad that we tend to forget
3) you know Who is still in charge, things are not out of control
4) Cynicism isn't really worth anything.
Your blog falls solidly into category 1) above, from my viewpoint.

Barry, I know it's silly, but I think the font may bother me the most. It resembles my first attempts at producing a font on the computer back in early high school - before I finally just gave up.

Jules, I had forgotten about the cheerleaders until you reminded me. If I was thinking better, I would have certainly included them in my list of olympic irks.

DADD, ha! Yes, I have days I wake up on that side. The logo is just the numbers 2012. I don't know if they're supposed to represent anything else.

Mike, I have to agree with you about art in the computer age. I don't know what to attribute it to, is it a matter of the computer allowing people with little skill to become almost good enough or is it a case of the computer age allowing a "good enough" attitude amongst people that would otherwise could have been craftsmen? I'm noticing it far more in the terrible kerning in signs.

Virgil, it's hard to express the difference between minor irritation and real frustration. Of course I'm not really upset, I just thought I'd share the things rattling around in my noggin. Thanks always for the kind words of support!

I haven't watched the Olympic Games since '84. (Maybe I've seen an hour's worth while channel surfing or watching news coverage over the last 28 years.)

Too hyped, too political & too corrupt. Not worth frittering away my time.

Great us, also leave us some comments, if any kind of, in Mobdro App after that you have actually called for an ideal Android Emulator Fine.