Domestic Update - Feud is Back!

For those who have been long-time readers to this blog, you may realize that this site arose from a feud started by Super Villain Paul McWhorter (alias, PJM) of West Texas over on his propaganda blog, Old Photo of the Day.  I'm sorry to inform you that after a period of uneasy peace, my nemesis has decided to heat things up again by insinuating that I'm starting some kind of rebellion among his readers as he refuses to update anyone with the goings on at his Texas compound.  While we've known for some time that he's been less than stable, I'm afraid that PJM's likely coming unhinged.  I didn't want to have to share this publicly, but perhaps there is someone out there with a degree in Abnormal Psychology who can help with what we're up against here: 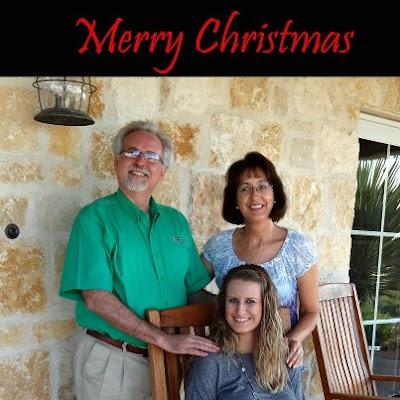 Above was PJM's Christmas card this year.  On the surface it seems very mild mannered and tame (if perhaps a tad early) – that is until you dig a little deeper.  Please set aside the far-away crazed look on PJM's face and the dungeon like appearance of the stone walls and iron lamps of his compound.  Perhaps his daughter Elizabeth who had previously been so fearful of his attempts to run her over with his z-boom has reconciled (you'll recall she was so fearful, she fled to Africa where she was placed in an undisclosed orphanage for safety).  Has she come to terms with her super villain father?  No!  If you look closely, this is not even her, but a clever substitute (or hostage) that PJM is using to hide the fact that his daughter fled his clutches at her first opportunity. 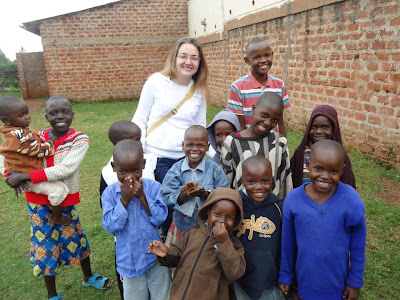 Perhaps you say, PJM is suffering some kind of trauma (like one of those poor creatures who loses their young and adopts a surrogate in its place.  Though Elizabeth has physically escaped PJM, this staged photo became the subject of chatter, when he tried to psychologically abuse his daughter from the other side of the planet. 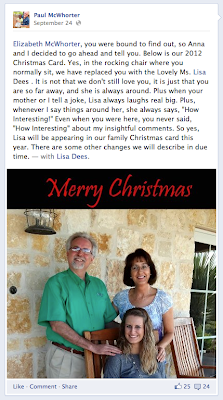 Apart from the curious question of who sends out a Christmas card in September, a few other questions arise.  What is Mrs. PJM doing joining this villain in his evil schemes?  Is she a willing collaborator or is this a sorry case of Stockholm Syndrome?  Why do they feel the need to physically restrain Ms. Dees with their hands?  Was she about to run?  But more importantly, what is going on with Chickie Town?  Beyond these obvious unsettling issues, what sick individual feels so comfortable in this his nefarious schemes that he would pose for his Christmas card in his stocking feet?  Full photo below: 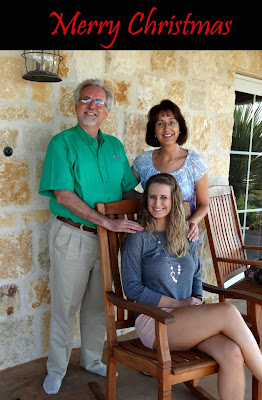 For those recently joining the history of this feud late, you may view earlier feud posts HERE.

You guys are the best. I would love to be at a party where the two of you would be.

I certainly hope my hardware can stand the strain of all these insinuations and inuendos. I'd like to be at a party where you were too, because I bet the food would be good. Here's hoping for a quick and lasting truce, so you can both devote more energy to comments about federal elections and such things.

What is it about people who live in compounds?

This is my first visit to this blog. I had no idea the extent of PJM's diabolical mind. I've followed his blog for a while now and he seemed like a "regular guy". Thank goodness his daughter was able to escape while she had a chance. The poor thing.

One thing we can give the sinister, evil PJM credit for is his daughter who is doing wonderful work.

I'm sorry Nate, you've got it wrong. Ms Dees is finally revealing herself as the brains behind the OPOD website (why else would she appear on the christmas card).

She writes the posts and selects the pictures. Mr & Mrs PJM are just puppets under her control. I even wonder if they really exist, closer examination of the christmas card reveals they are probably made out of wax...

I say the ENM should run for President.
I will even donate 17 cents to his war chest.

It appears to me that you are the instigator of this feuding business. PJM is known to me to be a notorious kidder, but your responses have taken on sinister proportions. If you keep it up, you could find yourself slowly losing the following you have (even the new ones you have gained), because they will soon discover the shallowness of your character.

Now, iOS 10 takes all those things and pushes them forward. The design is getting cleaner and more consistent. The architecture is becoming more open and convenient. The wiring, much smarter and even more secure. It's taken time — and pain — getting the physics, extensibility, and intelligence to this point. Now Apple gets to — and has to — pay it all off. to get more information go to cydianerd.

If you want to find the net worth and some information about a celebrity, here's the website celeb networth for you.

Merry Christmas. I was so this year in finding the information about How to Write Systematic Literature Review. I didn't even get the time to visit my family.