I'm writing this note from my living room in the moments before the kids wake up and come downstairs.  The last couple days we were up in the mountains taking the kids to the snow and what a time we had.  We came right at the end of a good storm, making it to the cabin just in time before the roads became impassable and awoke to a spectacular scene of white!  We came home late last night and although it is Christmas, the kids are too tired to be up yet.

Since I am usually the first to awake, I turned on the computer this morning to get a few things done.  My Internet browser has a homepage set to a news site.  I need to change this.  In my stupidity, I browsed the recent headlines.  The news is just awful.  For example, in a town in New York where a friend of mine was a pastor, a man set fire to his house and then ambushed and killed two firemen coming to put out the blaze.  I was going to give a few more examples, but they're mostly depressing and terrible too and it seems as though the reaction by pundits and governments is to call for the removal of liberty in the name of "safety" and create some kind of Orwellian police state.  So I checked my e-mail box and it was stuffed with e-mails (sent today) from merchants telling me how I can spend my money.  They wanted to make sure that they sent it Christmas Day because the stores open tomorrow.  How very nice of them (sarcasm, of course).

So the the world is messed up!  Filled with selfish and wicked people.  But not entirely.  I recently read about a couple of English scientists that designed a gravity powered light in hopes of trying to reduce the reliance on dangerous kerosene in African villages.  There is both good and bad in humanity and there resides in the heart a longing for a better world that should be. 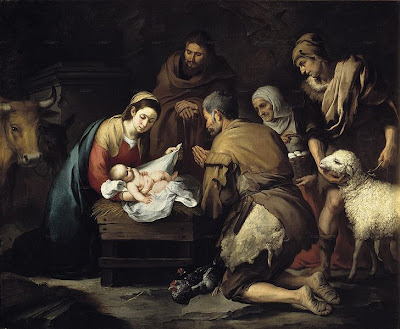 This is why I love Christmas.  It is a time of pause when people remember that there was a moment when God became man and physically entered our world.  The Powerful One who created everything beautiful and ideal (who wept over our sinful choices that have ruined everything) who left the splendor of Heaven, came down and chose to be born in a poor forgotten corner of our planet, revealing himself first to lowly shepherds, carpenters, and fishermen.

And it astounds me that His purpose in coming was to ultimately sacrifice Himself for us that he might provide a way of salvation to those who repent of their sins and follow Him.  Yes, the good news is our Redeemer has come, making a way to escape the righteous judgement to come on this world.

Thanks be to God for sending His Son!

You said it well, Nate (except for maybe the beginning). Thank you. May you & yours be filled with blessings.

As Tiny Tim said, "God bless us, everyone!"

Merry Christmas Nate! I've nearly given up on the news these days and keeping my nose in my books. There is much good being done today in the world but we're not gonna hear about on the news. Sad.

Best wishes to you and your family for the coming new year!

There'll always be evil in the world. We can only try to do our part in making it a bit better. Happy holidays!

Happy New Year! I hope you enjoy the weather in California and don't think about fiscal (or other) cliffs.

Thanks for all the new year's wishes, Chuck!

Thanks to you too also, Rob! The weather has actually been chilly for California, so it makes it seem more like everyone tells us what Christmas should feel like (pretty much 40s and 50s °F (~ 5-15 °C).

This post is really astounding one! I was delighted to read this, very much essay writers
useful. Many thanks

This blog is so nice to me. I will continue to come here again and again. Visit my link as well. Good luck
obat aborsi
cara menggugurkan kandungan

I loved it totally as other posts you have shared.
idm crack

the internet that individuals can make solid use of. Primarily, tubidy music This certain online search engine is referred to as Tubidy

After the fiasco of the Galaxy Note 7 battery, Samsung is all set to regain the reputation of the coveted tablet series with the upcoming Galaxy Note 8. The much-anticipated device is expected to make its debut a couple of months later. So want to know more about the Samsung Galaxy Note 8? Check out this website Galaxy Note 8 Price

You can communicate with the power of attorney Frigidaire maintenance , adopted in all the governorates of Egypt to request maintenance services of electrical. IDM Crack

This blog is so nice to me.The much-anticipated device is expected to make its debut a couple of months later. So want to know more about the Samsung Galaxy Note 8? Check out this websites://www.idmcrack24.com/.

Christmas has come and New Year is coming. One of the things I will do next year is to follow your new posts. It's because they provide what I need. Your articles are informative and great. Stay healthy and write more posts. Thanks
Short Ride games online || Kindergarten Dress Up games for girls || Moto X3M 2 best games for kids

Our Hi Profile Escorts in Gujarat, They are very adventurous; therefore they will take you to places other tour guides wouldn’t dare to tread. Give these girls a chance to lead your way and you will live to remember this powerful tour. Check our other services...
Escorts in Gujarat
Escorts Service Gurgaon
Call Girls in Dehradun
Russian Call Girls in Surat

I have come here with great emotions, hoping that my adventures will be full of meaning next season.
Your place is a great creative spot for me. Thank you
Friv10000
Friv2
Friv

I am receiving a lot of fun, one of the products that makes me most satisfied is you. I was wandering somewhere I couldn't find what I was looking for, I found you with the treasure I was looking for.
Thank you for sharing
Friv3 | Friv2020 | Friv4 | io games

"I Really Loved this post. This is very infomative Post. Keep updated More, are you interest to World Richest People
"