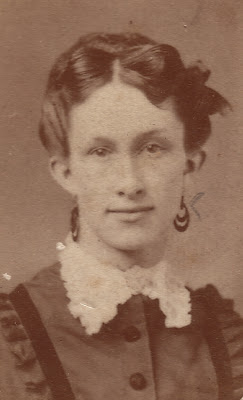 Today brings us another photo from the old family photo album.  This is Margaret "Maggie" Scott Grow, my great-great-grandmother.


Maggie was born February 11, 1848, in her family home in Sumter County, South Carolina.  She grew up rather privileged in a large plantation home.  Late in the Civil War, her family had a front row seat to the action as they could see the smoke from the burning of Columbia.  When Sherman's army came through the area, her parents buried their belongings and had her hide in the swamp with the servants until the Yankees passed.


After the war, the family resumed their life as normally as possible.  The Scott family was in the habit of inviting local seminarians to their home for parties throughout the year.  It was at one of these gatherings that Maggie met Jacob Grow, a student and veteran cavalryman from Georgia.  They were wed at the Mt. Zion Presbyterian Church in November of 1872.


Jacob served as what was known as a home missionary, serving in struggling Presbyterian churches in the frontier towns of the South.  They lived in Alligator (now Lake City), Florida; Jefferson, Georgia; Sulphur Springs, Texas; and a bunch of little towns in Texas like Llano, Burnet, Comanche, Dublin, Hamilton, and Brownwood, Texas.  While in Brownwood, in addition to church pastor, he was Vice President of Daniel Baker College (now Howard Payne University).  The family was living in Gainesville, Texas, when Jacob died in 1903.


Jacob would often preach at multiple churches on Sunday morning, riding from church to church, so Maggie would perform many of the duties at their home church including lighting the fire to power the church organ, welcoming people and playing music to occupy time until Jacob would arrive.


Maggie had five children:  Paoli, Mary, Willie, Elmira, and Marguerite.  Paoli became a baptist minister, Mary was my great-grandmother, and Willie was a salesman.  Elmira died at age 7.  There is a tender family scrapbook of all of Elmira's drawings that still exists.  Elmira was born when Maggie was 35.  They weren't expecting any more children, but Marguerite came along as a surprise when Maggie was almost 45.


Marguerite was only 11 when her father died and she never married.  She lived with her mother until she was old enough to get a job as a school teacher and then lived mostly at her place of work.  For years, she was the Latin teacher at the Hockaday School for Girls in Dallas.


From about 1910 until her death in 1926, Maggie lived with my great-grandmother Mary and her family.  My own grandmother remembered her quite well and passed along many Maggie's stories to me before she died.  My grandmother said that Maggie was always very in love with Jacob and missed him until her death, not in a sad way, but in fond remembrance.


Therefore I think it's fitting to close with a love poem I found in Maggie's scrapbook written to her by Jacob:


They met, he for a moment gazed,
Into those eyes so gently raised
And thought he ne’er before had seen
Such lovliness in form and mien.
That look sent to his inmost heart
A thrill of joy that made him start-
Can it be true, he thought, that now
At length I shall be brought to bow
Beneath the stroke of Cupid’s dart
And feel within my frame the smart
That follows when he draws his bow
Whose aim is sure e’en when ‘tis slow.
And then her voice whose tones subdued
Betoken that she could’nt be rude
Was like sweet music to his ear
Whenever he her words did hear.
The hours flew quickly past while he
By her enchanted seemed to be
Her presence gave him such delight
As he’d ne’er felt until that night.
The moment came to say goodbye,
His heart was sad, he scarce knew why.
He dreaded so to bid adieu
To one he thought so kind and true.
He went his way and all that night
Her form still lingered in his sight.
And whether sleeping or awake
His thoughts from her he could not take.
Now if you wish to know the truth,
The writer was himself--that youth,
And still there burns within his breast
The flame that then did break his rest.
And she who caused it is just as sweet
As when she first did rise to greet
Him at that place so far away
The night of Happy New Year’s day.
Posted by Nate Maas at 5:00 AM

Thank you for sharing some of Maggie's story! It sounds like she and Jacob had a successful life together. :)

I see Jacob Grow was from Georgia and Galusha Grow from PA. But the question still poses itself: are you related to Galusha Grow?
All these glimpses of people from the past have been fascinating!

What a beautiful story and poem! Can I see some family resemblance between Maggie and you? thanks for the family story.

I wish I knew a hundreth of what you know about your ancestors. What a gift!
El

Astrocrabpuff, since Maggie lived with my grandmother's family I heard many sweet stories of Jacob and Maggie. They've always interested me.

Virgil, good observation. Jacob and Galusha were both Grows, but those two were actually third cousins once removed. Which means that Galusha and I would be third cousins, 5 times removed.

El, if you have the time, I'd write down what you already know and start talking to older people in your family. I've found that tracing the family history makes me appreciate all history even more. It's been a fun hobby.

Thank you for your kind advice, Nate.
The short answer is 'tooooooooo late' - I'm now the oldest of all.
Here is a short Leonard Cohen style thought:
WHO WAS HE?
The cologne
splashed over his face
and neck
in the morning,
well fitting suit
with buttons of same cloth,
tie in place
well heeled
nothing could cover the smell
of anxiety and depression
his hands were soft
his eyes piercing
blue ring circling brown iris
what were his thoughts
on his long walks
from the small hamlet
to the near-by town
umbrella in hand in case,
skata spiri
when unhappy with me
I do not know my father

Thoughts about mother, grandparents, uncles
and aunts would be as short and empty as the above.
Sad, but I'm ok with it. Hope to leave a bit more behind for my children.
El