Correction (why bbl. is not the abbreviation for 'blue barrels') 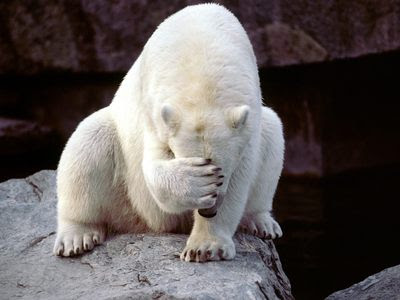 A few days ago, I wrote a post about why the word barrel is abbreviated bbl.  I thought I had done my homework.  I had checked my sources and it seemed like my post was reliably sourced (going back as early as 1904) when I had attributed the abbreviation bbl to the use of blue colored barrels in the Pennsylvania oil industry in the 1860s.


Thankfully, an anonymous reader wrote in with a tip saying that bbl was in use long before the Pennsylvania oil industry.  Sure enough, I did a little poking around on the internet and found some old cargo manifests from the early days of sail.  I found one as early as 1764 that use the bbl abbreviation and it was certainly in use even before this. 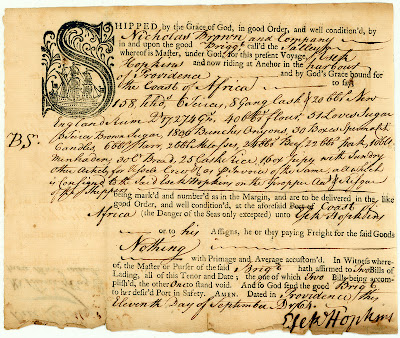 (Manifest of the brig Sally, dated September 11, 1764 - note the bbl abbreviation)
So where did bbl come from?  I contacted three reference librarians across the country, and after doing their research, all three came back with the "blue barrel" answer.  When after I explained my earlier cargo manifest finds, one librarian from New York still put up a defense saying that "blue barrel" was well researched and had a long history of documented evidence.


One site I found took a couple of good guesses stating that the "b" may have been doubled originally to indicate the plural (1 bl, 2 bbl), or possibly it was doubled to eliminate any confusion with bl as a symbol for the bale.  Of course these are just guesses.


I'll keep looking for a satisfactory answer and I'll let you know if I find anything.  Of course if there's someone else with more information, feel free to post in the comments.
Posted by Nate Maas at 12:54 AM

Email ThisBlogThis!Share to TwitterShare to FacebookShare to Pinterest
Labels: Correction

I am envious of your polar bear photo. That is very cool, indeed.

Duly noted Sir. That's an interesting manifest. Who might Hopkins be? The captain or owner of the shipping company?

According to the manifest Joseph Hopkins is the master of the ship.

Mathan, the polar bear photo was not my own, just one I found and thought was funny. If I recall right the original photo went with the title of "Embearassed."

RCT, Anon is correct, Esek Hopkins is the master of the ship (or in today's term, Captain). The Sally was a slave ship sailing from Providence, Rhode Island. A more detailed history can be found here:

It's pretty interesting to read. The Sally was one of many ships involved in the famous Triangle Trade. Because slavery is such a popular interest of people, it was easier for me to easily locate a cargo manifest from a slave ship when looking for a early bbl abbreviation.

BTW, RCT, I was enjoying reading your blog. You and I share many of the same interests and even those that I'm not involved with now, I've considered starting. Thanks for the post.

Indeed older mentions can be found, like in this book about a malignant fever in NY at the end of the 18th century. It includes a list of donations using ‘bbl.’ to describe the quantity of meal.

There may have been a use for the BL. before and they just started to use the BBL to indicate a barrel of what ever.

Roger, bale is typically abbreviated as "bl," so you could be right.

Typically I would have guessed the doubling of the b was to indicate plural, as in 'pp' for pages, but I found Benedict Arnold's Regiment Book from 1775 in which he clearly uses bbl for one barrel. There are other references that may be older.

Hey, I just hopped over to your website via StumbleUpon. Not somthing I would commonly read, but I liked your thoughts none the less. Thanks for creating some thing worth reading.

Hello Nate and friends, noted the comment within the comments about someone asking who might Step Hopkins be. He was the Governor of Rhode Island on several different occasions and also an original signer of the ' Declaration of Independence '.!! My son, an attorney from Pennsylvania, ismarried to a Kathy Thoma who is a great, great, etc, etc granddaughter of Step. Hopkins!! Always something interesting. Tom

Nate, nit-picking I might argue that master is today's term. Captain is a popular misnomer, carried forward from sailing days when a man with the rank of Captain was normally appointed to command a "true" warship. Smaller ships were sometimes commanded by a Lieutenant (hence the novel/movie "Master and Commander" and the title Lieutenant commanding. The latter now "corrupted" to the rank "Lieutenant Commander" which isn't actually connected to command. If you apply to the Coast Guard for a license to command a vessel, you get a Master's certificate, not a Captain's certificate.

I read somewhere that fluid barrel measurement is also known in the UK and US as Beer Barrels. "Beer" could be the extra "B"?

FYI "bbl" is also commonly used as the abbreviation for the barrel of a firearm, singular btw. Not that this could be any help, since firearm barrels are called barrels after wooden barrels, and the abbreviation surely followed. Early firearm manufacturers (and I mean REAL early) made barrels with staves of metal bound together with hoops, forming a hollow cylinder. Sound familiar?

I see your post is from some time ago, but has been a long standing question of mine too. Not sure if it was you or someone else who posted in Wikipedia the answer about the second b to distinguish between "bale" being avreviated as bl, but that is referernced for what it's worth. I hate how poorly etymology is tracked and that we lose meaning this way. I feel if I had taken a different path in life and money was no object, I would have devoted myself to develope an etymology task force akin to Marvrl's Agents of Shield.

BBl is short for liquid barrel,a s opposed to a barrel of dry goods.
German for liquid is "Flüssigkeit", and the "ss" was once written with the German "B" which has a hard "s" sound which the american and english dictionaries don't use in our 26 letter alphabet. Also see wikipidia "Eszett".

The way I tracked this down was in college in chemistry we researched "Lysergic surid diethylamide" Where surid is a german term for Acid, so therefore I figured maybe germans named a liquid barrel as to differentiate from a dry barrel of oats or grain, therefore to mark for seepage or stacking on ships perhaps.

A good read, even without a clear answer to "the" question. In reading the bill of lading, the 1st item is 158 "hhd"; while it has nothing to do with barrels, the double h caught my attention (similar to the double b for barrel). No doubt this note will only serve to muddy the whole discussion, but, is there some sort of form in popular abbreviations at the time? If only we could enlist the services of Dr.Who to revisit that era & clear this up, once & for all.

"hhd" is the abbreviation for 'hogshead' which actually is a barrel. The volume seems the vary according to what kind of drink it contained: beer 54 gal, brandy 56-61 gal, Madeira 45-48 gal. So the double 'h' makes sense...though it still doesn't explain the bbl.

Just ran across a likely answer in a Google group: in maritime usage, the amount of shipped goods of this kind is referenced in "bushel barrels."

Perhaps an answer? Seems better than most, anyway.

For the same reason ppg. means 'pages.' It's the abbreviation for 'barrels,' not 'barrel.'

It goes without saying that networking is an effective way to build your business, or to get yourself seen when looking for a new career. Back in the day, that meant pressing the flesh and exchanging business cards, but the internet era has made that something of a thing of the past. See more linkedin profile writing service

Yep, I hold the license, Master of Steam or Motor Vessels of any gross tons upon Oceans. There's no such thing as a captain's license. And when I was sailing deep sea even though I had a master's license I was sailing in the capacity of Chief Mate so I was not the captain. And there are smaller vessels that only require an operator's license yet the person is the captain of the vessel.

Why not "brl." for barrel. Makes more sense. I see bol and I think bubble.

Nice sharing, Thanks for sharing this type of posts, How many peoples like this post? Please tell me, also Good News for you, SALES ARE BEGIN! get ready for online abaya shopping

Note the snotty attitude of the librarian.

What she SHOULD have said is that it was researched by TOP MEN.

We pride ourselves on being one of the best concrete companies in Louisville, KY. Our professional team can help you with any concrete work you need done. Check out our service
concrete repairs louisville ky.
We are always happy to answer any of your questions.