Congratulations to the Chuck Kelly of Sugar Land, Texas, winner of the Person-of-Mystery contest!  I chose Stonewall Jackson for two reasons.  The first being that we are so very close to the anniversary of his birth.  The second being that I ran across the uncharacteristic 1857 photo of Jackson while a professor at the Virginia Military Institute, it is a period between the clean shaven Mexican War look and his more recognizable full bearded Civil War appearance. 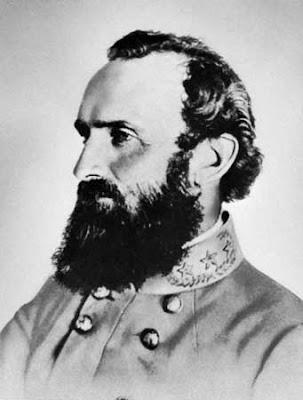 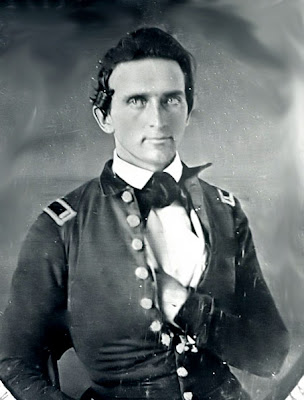 (Stonewall Jackson, no beard)
Over Christmas, I conducted a short-lived experiment in facial hair myself (did you know that the technical name for this is 'pogonotrophy'?).  I grew a beard from Christmastime until this morning.  I thought it added greatly to my face, but my wife thought otherwise, so it is now a thing of the past.  I wonder myself if Jackson would have been regarded so highly if he wore the 1857 look throughout the war. 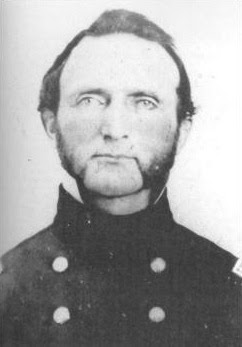 Thomas Jonathan Jackson, was born January 21, 1824, in Clarksburg, Virginia.  Which means that this Friday will be the 187th anniversary of his birth and in his honor, the Commonwealth of Virginia, celebrates his birth each year with a state holiday. 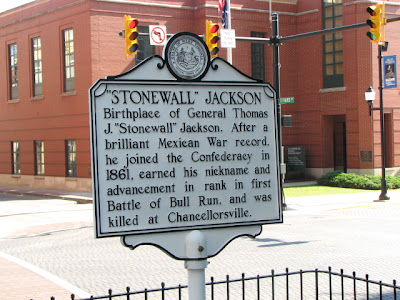 Jackson is one of the most beloved and enigmatic figures from the Civil War.  He was born in a part of Virginia, that during the Civil War, Abraham Lincoln (disregarding the Constitution) declared was a new state of West Virginia.  When Thomas was two years old his father died of typhoid.  His mother remarried, a year later, she too died in childbirth.  Thomas' new stepfather did not like having stepchildren, so Thomas (now orphaned at age seven) was sent to live with his uncle, Cummins Jackson.  Jackson was treated with stern discipline by his uncle and largely educated himself and other slaves in his uncle's employ.  Eventually, Thomas became a schoolteacher in the town and through determined efforts obtained an appointment to West Point. 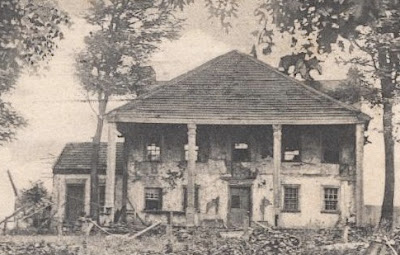 (Jackson's Clarksburg home prior to demolition)
Due to his lack of formal education, Jackson began his studies at the bottom of his class, but through determination, eventually rose in rank and graduated in 1846 with honors, 17th in a class of 59.  He soon was called to serve in the Mexican War as a second lieutenant of the 1st US Artillery.  He served with distinction, earning two brevet promotions during the conflict. 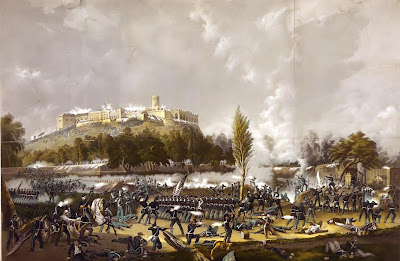 In the spring of 1851, Jackson resigned from the army and accepted a teaching position as an artillery instructor at the Virginia Military Institute (VMI).  He was a very intelligent, but unpopular teacher.  Jackson was known for memorizing his lectures and then reciting them from memory.  He was so unpopular that on one occasion several students threw a brick at him from a third floor window, narrowly missing his head.  He was known for his piercing gaze with his bright blue eyes, earning him the nickname "Old Blue-Light."  It was said that if a student were bold enough for an explanation of his lecture, Jackson would recite the same lecture a second time.  He was so disliked that a group of alumni unsuccessfully tried to have him removed in 1856. 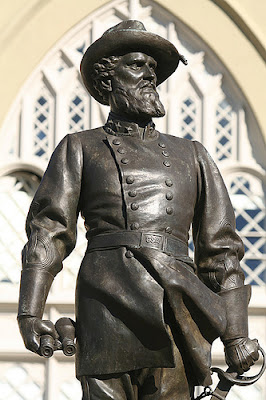 (Jackson's statue at VMI today)
Jackson married first in 1853, but his wife died the next year shortly after giving birth to a stillborn son.  Jackson married a second time in 1857.  The two had a daughter who only lived a month in 1858.  A final child, a daughter, was born in 1862, shortly before Jackson died.  As unaffectionate as he was towards students, Jackson is remembered for being very tender with his wife and children, giving them nicknames and doting on them. 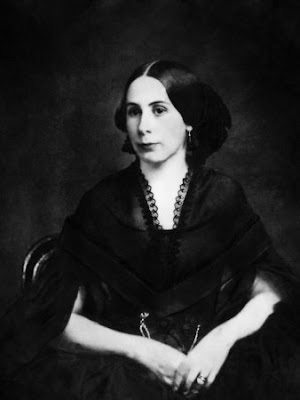 (Mary Anna Morrison, second wife of Jackson)
At the onset of the Civil War, the Confederacy was in need of experienced leaders and Jackson was placed in command of the combined 2nd, 4th, 5th, 27th, and 33rd Virginia Infantry regiments.  These regiments were all from the Shenandoah Valley and were to be later known as the "Stonewall Brigade." At one of the first major engagements of the war, the Battle of First Manassas, when many inexperienced soldiers began to retreat, the South Carolinian General Bee, pointed to Jackson and encouraged his men to behave like Jackson's well drilled soldiers.  He said, "There is Jackson standing like a stone wall.  Let us determine to die here, and we will conquer.  Rally behind the Virginians!"  Bee was mortally wounded in the action, but thereafter Jackson was known as Stonewall Jackson. 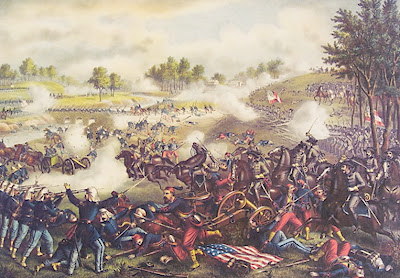 Over the course of the war, Jackson proved adept at inspiring his highly motivated and well-drilled men quickly over vast distances, using terrain and surprise to his advantage, constantly keeping the enemy off balanced and defensive.

Jackson's achieved early fame during the Valley Campaign, where his forces, numbering less than a third of the enemy strength, marched an average of 13.5 miles a day for 48 days, during which time they won five significant victories and eventually led the enemy to abandon the Shenandoah.  Following this action, Jackson raced his men to Richmond to defend against McClellan's Peninsula advance.  Their appearance at the battlefield led Union intelligence to greatly overestimate Confederate strength and led to the eventual retreat down the peninsula.  For all their marching, Jackson's men were humorously given the title of "foot cavalry." 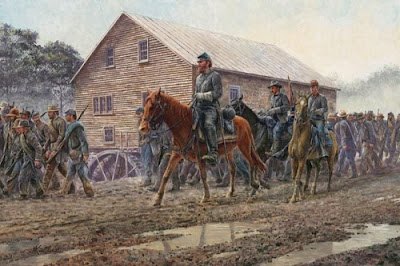 Robert E. Lee placed implicit trust in Jackson to carry out his overall plans and would detach Jackson to keep Union forces constantly surprised.  He slipped his men behind General Pope and captured and destroyed the main Union supply base at Manassas.  He then held Pope with fewer men until the Confederate forces could smash the enemy a second time at Manassas.  During the Maryland Campaign, Jackson was again detached to capture Harpers Ferry and later distinguished himself at the Battle of Sharpsburg. 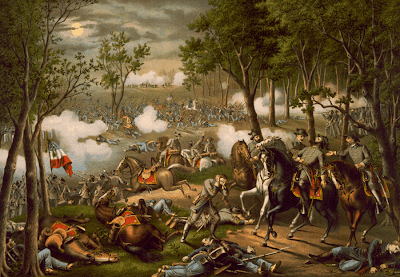 Perhaps his most brilliant action was during the Battle of Chancellorsville, where he led his men around the Union right flank and routed the 11th Corps.  Unwilling to let the momentum die, he continued pressing through the evening and after reconnoitering, Jackson was returning to his lines when men from North Carolina mistook his party for the enemy and shot him.  Taken to the rear, his left arm was amputated.  When hearing of Jackson, Lee sent a message to Jackson saying, "Give General Jackson my affectionate regards, and say to him: he has lost his left arm but I my right."  At first recovery was thought probable, but he came down with pneumonia and eventually died eight days later.  Throughout the South, Jackson was morned and lamented.  Songs were composed and he became the first popular national hero. 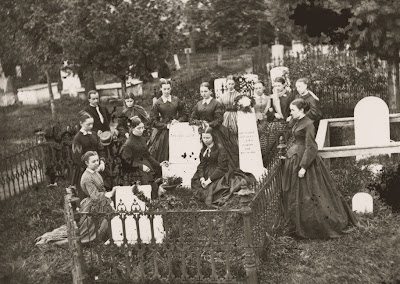 (Women visiting Jackson's grave)
Perhaps never has such a quirky military figure gained such popular adulation.  His eccentricities were well known:  he would often pray alone and trancelike before battle, he had an unnatural calm in battle, he was known to hold aloft his left arm throughout the fighting, and always enjoyed sucking on lemons, he wore old worn-out uniforms and rode an undersized steed, avoided combat on Sundays, and avoided eating pepper because he thought it made his left leg ache. 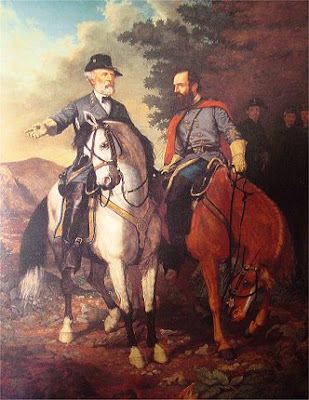 (The Last Meeting of Lee and Jackson)
In 1889, Virginia made Robert E. Lee's birthday (January 19) a state holiday.  1904, Virginia added Stonewall Jackson (January 21), making it Lee-Jackson Day.  For a short time, from 1983 to 2000, Martin Luther King, Jr. was added making it Lee-Jackson-King Day, but some thought having King celebrated with two generals of the Confederacy was not fitting, so now Virginia has two separate days reverting back to Lee-Jackson Day.  The interesting thing is that Jackson in his own time was known for being rather friendly to Black people.  In defiance of state law, he started a Colored Sunday School Lexington in 1855 and taught slaves to read and supported it financially even while away in combat.  Many of his former students went on to found Black churches and schools.  The first donation for the statue for his grave came from Lexington's Negro Baptist Church and in the Black Fifth Avenue Presbyterian Church of Roanoke, Virginia, is a stained glass memorial to Jackson, the founding pastor having been a member of Jackson's class. 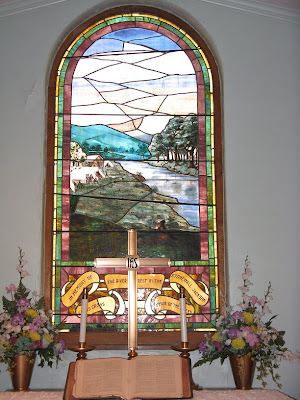 History is funny sometimes, isn't it?
Posted by Nate Maas at 10:07 PM

Thank you! I really enjoy these mini history reviews...especially from the old South.

Good history there, Nate. Thank you. We missed going past The Compound, thinking we had to be in Phx. (I had the dates wrong). Now meandering through southern NM. Billy the Kid history yesterday in Lincoln, NM.

Thanks for the lesson..I now know more about Jackson that I ever learned in high school! I really enjoyed the old graveyard photo..I was very interested in the ladies dresses..I have a photo that has the same trim that the one lady has on the upper sleeves of her dress..at the time we wondered if perhaps it had something to do with the Civil War..a death of a soldier or if it was just a trim..this is the only old photo where I have seen it..so now I know mine is not a fluke:)

I just added your blog site to my blogroll, I pray you would give some thought to doing the same.

Anon, thanks for the vote of approval. Although, until I know who you are, I won't be able to find your blog.