I know the trend for sometime now has been for people to do their banking online.  I think most people enjoy the convenience of having their bank come to them and it definitely saves the increasingly expensive cost of postage.  Back in 1916, William H. Coltharp of Vernal, Utah, found a unique way of using the mail to bringing banking to the town and save money in the process. 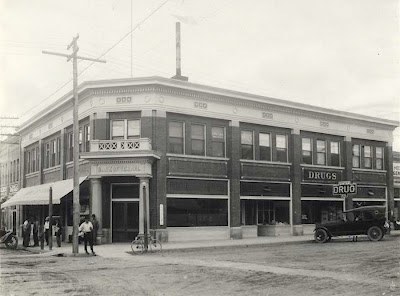 In the 1910s, Vernal, Utah, had a population of a little over 800, but was keeping an eye toward future growth as the county seat.  A fine town like Vernal needed an upscale brick bank to express its cosmopolitan outlook, but the nearest brick works was in Salt Lake City over 170 miles away.  Shipping the bricks would cost over four times the purchase price. 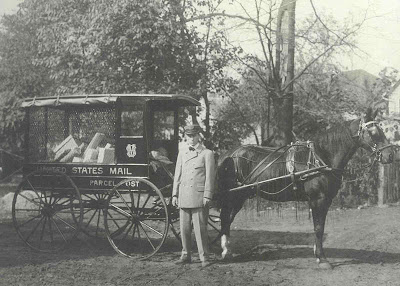 It was then that Coltharp hit on a novel idea.  The United States Mail had in 1913 begun domestic parcel post service.  To encourage people to use the service, rates were kept rather low.  Coltharp did the math and realized that he could mail the bricks from Salt Lake City cheaper than having them delivered by wagon, so he had the Salt Lake Pressed Brick Company bundle the bricks into packages of about 50 pounds (to stay within parcel post weight limits).  The company would mail about 40 crates (or one ton) of the packages a day. 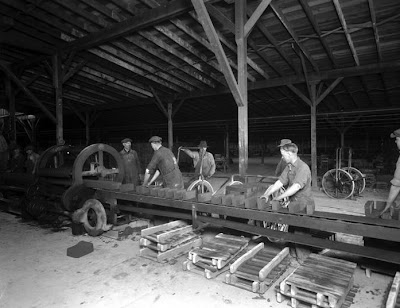 To get the crates to Vernal, the US Mail sent the bricks to Mack, Colorado, via the Denver and Rio Grande RR, then by narrow gauge Uintah RR to Watson, Utah, and finally by freight wagon to Vernal.  Each of the 80,000 bricks traveled over 400 miles across tough terrain, including steep mountain roads, at a final cost of about seven cents per brick! 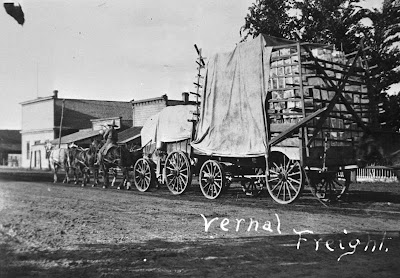 Postmasters along the route expressed their frustration with the volume of weighty crates and the US Mail quickly realized that if Coltharp's scheme caught on, it would hopelessly clog their transportation systems and strain their mailmen.  So in response, Postmaster General Albert S. Burleson, allowed the remaining bricks be sent to Vernal, but issued a new regulation allowing only 200 pounds per sender each day and stated, "it is not the intent of the United States Postal Service that buildings be shipped through the mail." 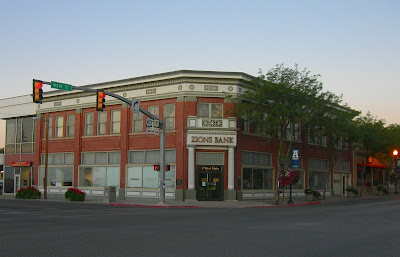 The bank was completed the next year and was nicknamed "The Parcel Post Bank" by locals.  The building still exists and still serves as a bank at 3 West Main Street in Vernal.

People can be very resourceful, I love it!

I'd heard about the bricks-through-the-mail, but didn't know it was to Vernal where we have done lots of camping at Dinosaur National Monument. Next time we will take a closer look. Thanks, Nate.

Nifty photos, thanks for posting! I wonder whether they could have made the bricks onsite? Or at least closer than 170 miles away. Never made bricks myself, but the church my Mom attended as a girl was made of bricks made locally by the members at that time. Maybe they needed suitable clay and couldn't get it locally?

My wife's Grandfather was W.H. Coltharp, and all of your story is true. However, there is one interesting fact that is not well known. William Coltharp owned the general store in town and many of the town folk kept their money in his store safe. Since Butch Cassidy and his gang were known to frequent the area and the town, Coltharp was afraid that he would be robbed. Not wanting to be responsible for losing everyone's money, he decided to build the bank.

Question... In your article, is the freight wagon shown actually loaded with bricks for the bank?

Dear Anon, thanks for the additional information and the personal connection. The person who sent me the photo of the Vernal Mail Wagon, no longer has a working e-mail and I could not find the source of the image. They seemed to think it was a wagon of bricks headed to Vernal at the time, but I'm unsure. I did find a separate photo of the brick crates here:
http://tinyurl.com/vernalbrick

When banks start lending money against IP assets, it has to be a pretty positive sign. I know that banks have a pretty poor reputation these days, Get Some Dosh

Do churches hold more power than supreme court or was it a church marriage so broken decision was taken by church? What's the reason behind?What if the church is running off debts because of church loan? Who will decree then?

Your website is very nice and interesting, the website may increasingly exist and no one obat ginjal bengkak

Nowadays it's not that tough to get church loans but the fact is high charges and others. But it's solution is also available. By using a complete church lenders directory churches can find the right financier for them. church financing charges

good from the official internet Be aware of that download Download Mobdro APK for apple iphone premium Apk. You could best.

Informative and interesting which we share with you so i think so it is very useful and knowledgeable. I would like to thank you for the efforts. Prize Bond Schedules

There's a reason the Bible uses the phrase GOOD SUCCESS and not just "success." There are many different types of endeavors and/or people who are successful but that doesn't make them good! bible diet

Hey friend, it is very well written article, thank you for the valuable and useful information you provide in this post. Keep up the good work! FYI, Pet Care adda
Credit card processing, why i am an atheist pdf,10 lines on computer in english