When I was a kid, I knew all the flags of the world, but it appears I haven't been keeping up on things.  The other day, I noticed someone logging in from Podgorica, a town I didn't recognize immediately together with a flag I didn't immediately recognize.  When I read up on it, I realized why it didn't look familiar, it's from the country of Montenegro and has only been around since 2004.

I kind of like it for several reasons.  For starters, it looks like a much older flag, which means it looks pretty nice flying over historic structures and such. 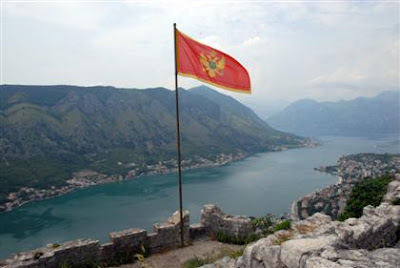 It also uses muted tones of primary colors, which means it's bold and recognizable, but not an eyesore. 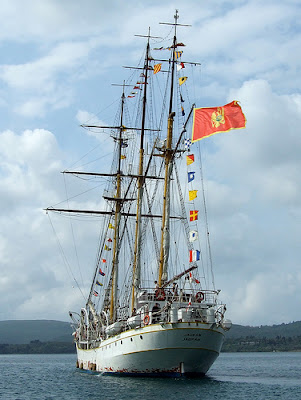 It incorporates the double eagle of flags nearby, which makes it nice on school children trying to place it on the map, but it seems to buck the trend of other new flag designs which look to me so much like a bunch of company logos from the 1980s.
So kudos to whoever designed this one!
Posted by Nate Maas at 5:55 AM

Email ThisBlogThis!Share to TwitterShare to FacebookShare to Pinterest
Labels: Flags

Yes a noble banner indeed. It looks great flying from the ship's rigging.

Montenegro is in fact very old. It’s the mountainous part of Serbia (monte negro ~ mountains black) which stood up against the 15th Century Turkish invasion of the Balkans, and they kept their independence for a large part until WWI.

New to me too . . . so I had to go look it up to find out where a new country comes from, nowadays. I thought every inch of land was already claimed by a country!

Montenegro . . . one of three former Yugoslav republics . . .(the others being Slovenia and Croatia) Is this correct?

Nance, good memory. Yugoslavia was made up of what's now six countries: Slovenia, Croatia, Macedonia, Montenegro, Serbia, and Bosnia. There's also Kosovo, which some consider it's own country and some nations don't recognize.

Note, in the middle of the flag, the Lion of St. Marc, symbol of the ancient Republic of Venice (X century-1797) and symbol of the Italian town of Venice today too.
Montenegro is the only country in the Balkans NEVER conquered by the Turks in the middle ages. Montenegro entered willingly to Yugoslavia in 1918 and exited some years ago.
The wife of Vittorio Emanuele III (King of Italy 1900-1946) was born in Montenegro.

EESTI, thanks for pointing that out!