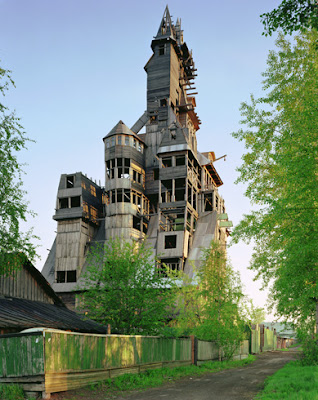 It no longer exists, but at one time, the Sutyagin House in Archangel, Russia, was was the largest wooden structure in the world.  Its impressive 13 floors (reaching a final height of 144 feet) was all the more impressive when it is revealed that it was pretty much designed and built by one man, Nikolai Sutyagin. 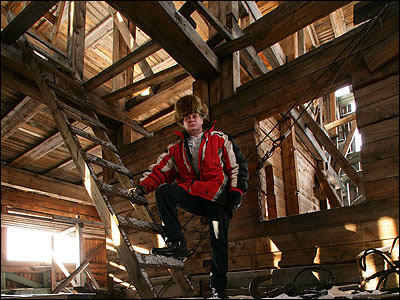 Nikolai was a hard working man who had grown up in the Soviet Union.  In 1992, when Russia began taking steps towards capitalism, Sutyagin cornered (some say through gangsterism) the lumber business in Archangel. 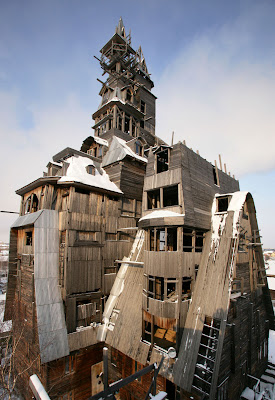 Now the richest man in the city, Sutyagin wanted to display his wealth and had plenty of lumber, so in defiance of building codes, he began expanding his house.  He kept adding on bit by bit, occasionally stopping for a time, only to resume again.  At one point, after a few years, he thought he was finished, but then realized that if he kept going a little higher, he'd have a view of the sea. 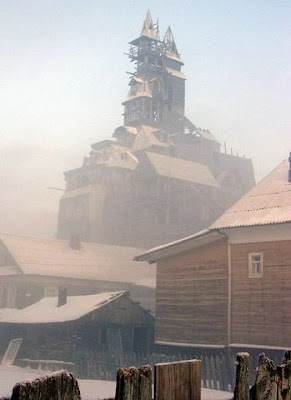 His work was finally halted in 1998, when he was sent to prison for four years on racketeering charges.  When he was released, he discovered that his rivals had robbed him blind and now he didn't have the money to finish his home or to bribe building inspectors (Archangel has a two story limit on wooden structures).  To stave off authorities, he sealed the roof at the second floor and claimed in court that everything above was decorative.  However, in 2008, the city condemned the property as a fire hazard and on December 26, 2008, demolition began. 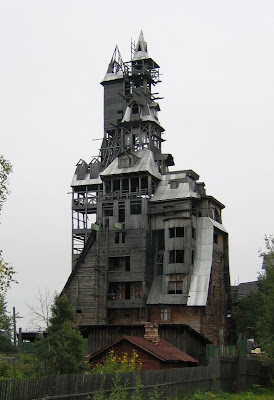 I always find it interesting what one man can do if he puts his mind to it.
Posted by Nate Maas at 11:13 AM

It's gangsterism, you can not monopolize a business in russia without the aid of the russian mafia.The Sutyagin house should have been preserved, authorities should have inspected it thoroughly and supplement what it lack in the building and fire code... or revise both codes to suit the wooden house.
The city can file tax evasion charges against Sutyagin, evict him and sequester the house in the city' favor. They can turn it into a museum or a city heritage sight.
Boy, I can tell a magnificent building when I see one.
What a waste.

You really do find the most interesting historical items, Nate. Thanks.
I'm glad to see that Live Feed has me back in WY now.

Neat little bit of trivia. Thanks. It got me to wondering whether anyone has tried using modern concrete and steel methods, ?scaffold and curtain wall?, but using wood. How high can you stack wooden beams end to end without shattering the bottom ones?

Has anyone tried? Hmmmmm.

He was a character..but his house was awesome..too bad they tore it down:(

It is sad the Sutyagin House doesn't exist now. I would like to see it with great pleasure! It is so mystical. By the way, guys, I found out about this handyman service https://youdo.com/india/chennai-services/repair-renovation-services/carpenters/ I am going to find there a carpenter for my little house.

Wow, fantastic weblog structure! How lengthy have you ever been blogging for?

you made blogging glance easy. The total look of your website is excellent, I really enjoyed this article.

We deal with thousands of flood claims a month. We understand what our clients need more than water damage restoration is peace of mind that it’s being handled properly. By professionals who know what they are doing.
flood damage in Herndon Virginia

Thank you for sharing good and useful information. I would love to read your post on the weekend and share it at http://www.thuoccuongduongmaxman.com/

Trees located in the house where the termites attack those trees and palms of all kinds,


I am very happy to take services from Everyhourloans.It's one of the best loan lenders in Ireland.

The post is absolutely fantastic. Lots of great information. This is a great post & very useful, are you interest to Daily Hadith In Urdu

Are you looking for BMW Scanner for auto diagnostic your vehicle? AUTOSCANit is selling BMW ICOM A2 scanner at an affordable cost. It helps car owners to get real-time data of the working condition of car control modules.
Want to get Mercedes Scanner and Mercedes SD Connect C4 with one of the top quality at the best price through original made german company autoscanit.