We're back and what a weekend!  Thanks for your patience with my lackluster posting, but it just means that you'll be seeing plenty of new material soon. 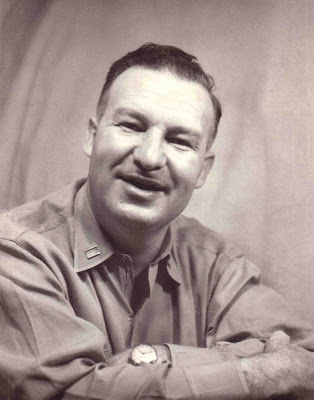 Today I'm posting a photo of my grandfather, Dick Maas.  I never met him as he died before I was born, but as you can see he was a career naval officer.  Here he is wearing his lieutenant uniform, so I assume this photo was taken sometime in the early to mid-1950s.  He was a supply officer on the USS Boxer, an Essex class aircraft carrier.  He saw action during the very end of World War II and then was there for the Japanese Occupation.  During Korea, the Boxer was much more active.
I thought about him a lot during our weekend trip since the USS Hornet was the same kind of carrier.  Although I found it funny thinking so much about someone I never met.  This photo was interesting to me as my grandmother pointed it out one time as her favorite photo of him.  What was it about this photo that made it her favorite?  I wish I knew.
He eventually reached the rank of Lieutenant Commander, but was denied a promotion to Commander due to high blood pressure.  He retired from the Navy, but a couple of years after that in 1960, he had a heart attack at work and died at age 45.  My father was 16 when his father passed away.
Posted by Nate Maas at 6:59 AM

Great picture! Maybe it was her favorite because it looks like such a natural pose, great smile!

That must have been hard for your father. Your granddad looks happy in the picture, that's why it's a nice, warm remembrance of him.