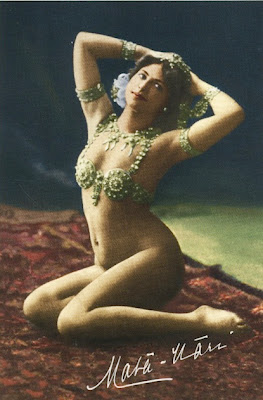 Margaretha Geertruida "Grietje" Zelle was born August 7, 1876, in Leeuwarden, Netherlands.  Her parents divorced when she was 13 and she ended up living with her godfather.  After a short stint at a boarding school where she was to train as a kindergarden teacher, she had a relationship with the headmaster and was sent home.  Soon thereafter, through a personal advertisement in a newspaper, Grietje met and married a man 22 years her senior, Captain Rudolf MacLeod, a Dutch military officer home on leave from the East Indies. 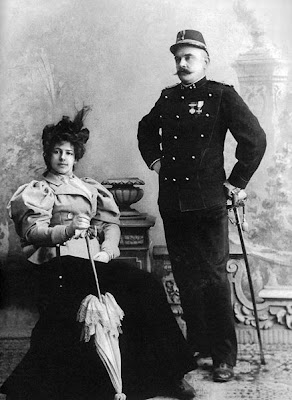 The marriage was not a happy one.  He was a drinker and a womanizer and she liked to flirt with the other officers.  He became jealous and controlling and despite their money troubles, Grietje liked to live extravagantly.  Despite their troubles, they did have two children, Norman and Jeanne. 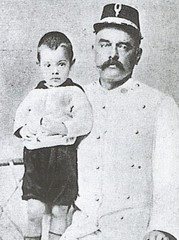 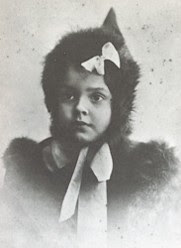 (Daughter)
The couple returned to Java and made their home there, but the marriage was not a happy one.  Rudolf was a drinker, wife-beater, and a womanizer, openly keeping a native wife and a concubine.  Their two children took ill with congenital syphilis, and Norman was accidentally killed when he was overdosed with mercury.  Following the death of Norman, the marriage fractured into fighting and acrimony as the two blamed the other for the death.  At a particularly low point, Rudolf caught Grietje with a fellow officer and he whipped her with a cat-o-nine-tails. 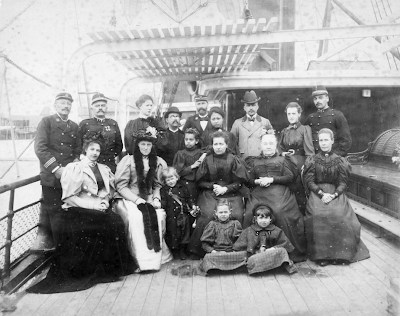 (Rudolf standing second from left, Grietje seated far left)
MacLeod finally quit the army and they couple returned to Holland where they soon separated.  MacLeod took possession of their daughter and placed an advertisement in the local papers disavowing any responsibility for her finances.  Penniless, Grietje turned to prostitution for a living.  Working odd jobs, the owner of a local circus told her that her talent lay in dancing. 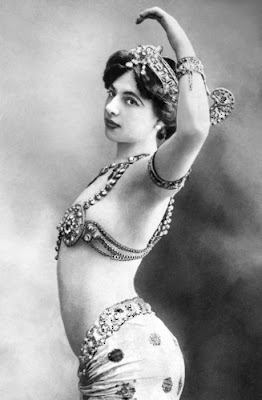 Taking herself to Paris, and reinventing herself as the Mata Hari, Grietje took on the persona of a East Indian temple dancer adorned with a beaded metallic bra.  Her unique erotic dancing became an instant sensation and she was soon the talk of the town, performing in all the best venues.  Mata Hari took a string of wealthy lovers and lived off her their generosity.  Eventually, the novelty of her performance wore off and imitators crowded the stage.  It seemed as though no matter how low her funds ran, her tastes continually ran on the expensive side.  When things became too difficult, she would return to high class brothels to earn money. 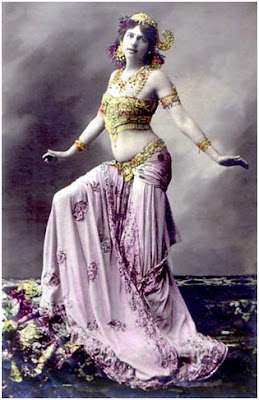 In 1914, she signed a dance contract with a club in Berlin.  However, soon her money again ran out and she returned to Amsterdam.  Back in Holland, she was approached by the German Consul, Karl Kroemer, who told her he was recruiting spies.  He gave her 20,000 francs and assigned her the code name, H21.  Most agree that the Grietje thought the proposition silly and disposed of the invisible ink Kroemer gave her, but she needed the money to return to Paris and continue her lifestyle. 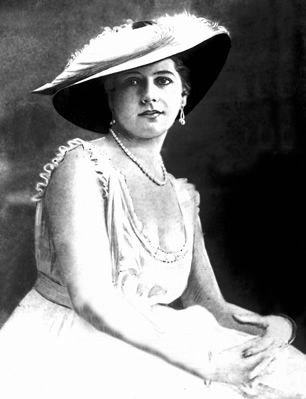 British counter-intelligence was quickly suspicious of the Mata Hari and passed their information along to French Intelligence.  The French had her followed and steamed open her letters, but rather than uncovering evidence on a high-level spy, they revealed a string of lovers and romantic liaisons, embarrassingly, one of whom was a rather high ranking French secret policeman. 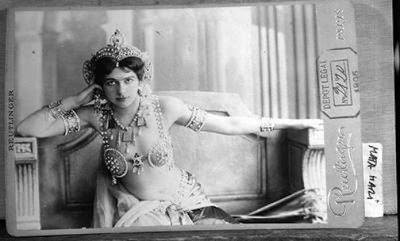 At this time, she had fallen in love with a Russian captain, Vadime de Massloff, who was staying in a spa in Vittel, France.  As Vittel was too close to the lines, Grietje applied to French Intelligence officer Georges Ladoux for a pass to see de Massloff.  Ladoux, believing her to be a German spy, granted the pass under the condition that she spy for the French.  Grietje agreed so long as her debts would be paid. 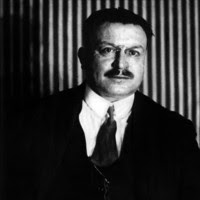 (Georges Ladoux)
After a short visit in Vittel, Grietje returned to Paris where Ladoux sent her on a mission to Belgium to seduce the German military governor.  Unfortunately for Grietje, Belgium proved impossible to get to and she ended up in Spain.  Figuring that she could earn money in Spain, she seduced a German intelligence officer, Captain Kalle.  She obtained information on Germany's activities in North Africa and returned to Ladoux. 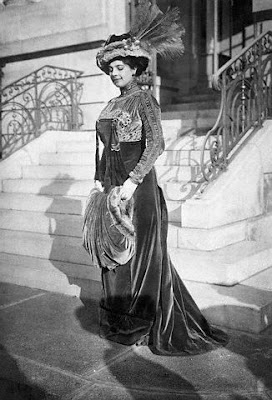 Ladoux instead disbelieved Grietje and assumed that she was passing along French secrets to the Germans in Spain.  He had her arrested and charged with espionage.  During her trial, no substantial evidence was presented, but disappearing ink had been found in her room and the prosecution made accusations that she had been responsible for the deaths 50,000 soldiers. 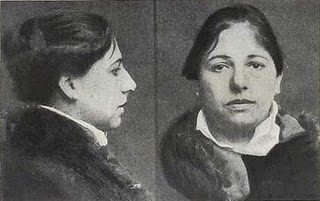 (Mug Shot Taken the Day of Her Execution)
She was found guilty and executed by firing squad on October 15, 1917.  She refused a blindfold and reportedly blew a kiss to her executioners. 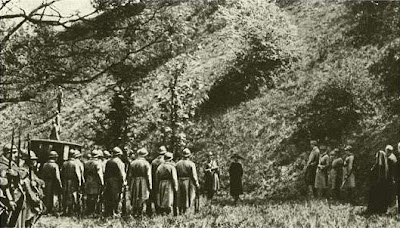 BTW Mata Hari means ‘eye of the day’ in Malay.

That was one gutsy lady.

Nate, your posts are always so interesting. I must read more about this famous lady.

no, mata hari means "sun" or "eye of the day", literally, in bahasa Indonesia.