Worst Neighbor Ever (Charles Crocker and the Spite Fence)

We've been fortunate.  For the most part, we've had really great neighbors.  The ones to our right and left have always been pretty good.  There is a rental behind us that has had a string of both good and bad tenants, but none has been as awful as the robber baron Charles Crocker. 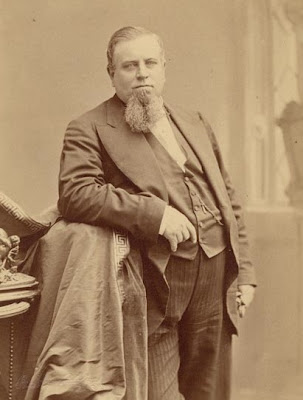 The other day, I was looking at the stats for this blog and I noticed that the post on Eadweard Muybridge has been the most viewed so far, which is understandable from my perspective since he's such an interesting fellow.  But in my readings on his photography, there was something I stumbled upon, somewhat related to Muybridge, that I thought I'd mention today. 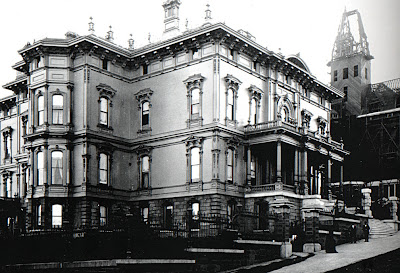 (Hopkins Mansion under construction behind the Stanford Mansion)

In 1877 and 1878, Muybridge was able to take a series of photos from the top of Mark Hopkins' uncompleted mansion on Nob Hill in San Francisco.  Using mammoth-sized large format photography, Muybridge captured a 360° panorama of San Francisco on 13 plates.  Each exposure took somewhere between 15 and 20 minutes which meant that he spent the day photographing from about 11 am to 4 pm.

The prints are each about 20-5/8" tall and placed together form a panorama of over 17 feet in length.  I just love looking at these images.  If you haven't seen them, you can take a look at them HERE.  Or to get a really good feel for the full 360 feel, you can see a QuickTime Panorama HERE. 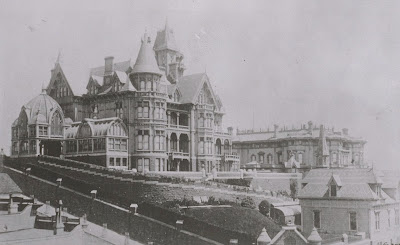 There is so much to see in the photos, but prominent in it all are the mansions of the "Big Four" atop Nob Hill.  It had become fashionable for these tycoons to buy an entire block of houses to then level upon which would be built new mansions as architectural monuments of their wealth.  Many of the former homeowners sold for tidy profits with the last of the holdouts typically doing even better.  For example, when James Flood was acquiring his block, he ended up paying $25,000 for the final property. 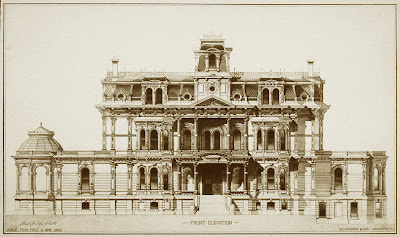 Charles Crocker, eager to match his rivals, began buying properties on his desired block and even before he had finished purchasing all the properties, his construction crews went to work building his palace.  One after another sold to Crocker.  All but one.  You see, Crocker, unlike his wealthy associates was unwilling to pay inflationary prices.  So when when it came time to purchase the final property on his desired block, owned by a German undertaker named Nicholas Yung, Crocker only offered him $6,000 for the home.  Yung, believing his home was worth more refused to sell and set his price at $12,000. 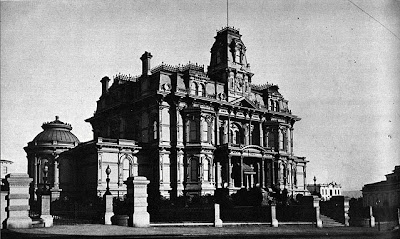 Crocker became indignant towards Yung for setting his own asking price and made all manner of threats against the man, but Yung remained stedfast and refused to sell for less.  Crocker then ordered all the property on his block be graded lower, leaving Yung's home floating on a rectangular dirt pedestal.  Yung refused to sell for less than his asking price.  Crocker then threatened to build a fence around Yung's property, but Yung wouldn't compromise, so in 1876, Crocker made good on his threat and at the cost of $3,000, built a 40-foot high walled fence around the three sides of the Yung property that Crocker owned, effectively cutting off nearly all sunlight and air flow to the residence.  The fence was so high, giant braces were erected to keep the fence from blowing over.  The Yungs had to light candles in the daytime, all their plants died, and the house acquired a damp and gloomy feel.  Still Nicholas Yung refused to lower his price. 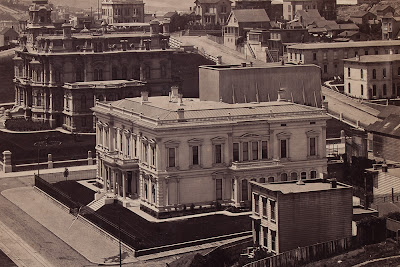 So that's how things stayed.  Two years after the fence was built, Muybridge inadvertently captured Crocker's "spite fence" on film.  You can see it between the Crocker and Huntington mansions and if you look closely, you can just make out the very top of Yung's chimneys inside the fence.  The Yungs tried to get the city to provide them justice, but Crocker was too wealthy and influential and kept the legal system from providing relief.  Yung became so frustrated, he eventually mounted a coffin brought home from work on his roof facing the Crocker residence as one last measure to upset the Crockers. 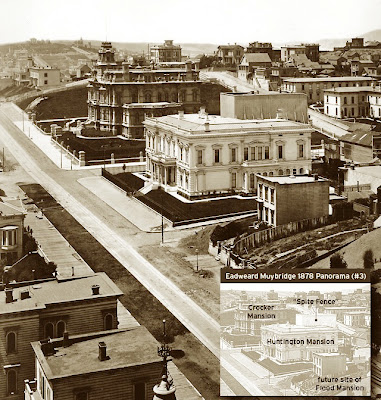 Eventually, the Yungs couldn't take living in their home had their house moved to another lot on Broderick Street.  After the Yung family moved, the Crocker had the fence reduced to 25 feet, but kept the somewhat reduced structure in place to devalue the lot the Yung's still owned.  As the years went by both Nicholas Yung and Charles Crocker died, but the fence remained.  When Rosina Yung died in 1902, the lot was valued at $80,000.  Finally in 1904, the descendants of the Yungs sold the property to the descendants of the Crockers and the fence came down.  Two years later, the fire following the massive San Francisco Earthquake consumed the Crocker mansion.  Today Grace Cathedral occupies the same block, certainly a fitting structure for the site of the former 28-year fence of hate. 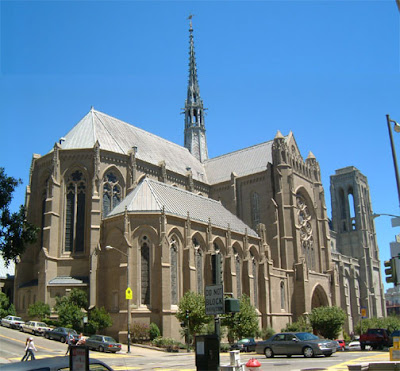 Thank you for this great lesson, Nate. So interesting. Also for the explanatory sketch insert showing just where the fence was. It was so huge I couldn't pick it out until I read more!

Great story and thanks for sharing it. What an incredible jerk Crocker was. Greed doesn't always get what you want.

Headstrong men at play here. Crocker cut part of his view off, Yung lived in the dark and Huntingdon was not interested to play and put up with this piece of cement in his backyard.
Interesting.

I find it very funny. Crocker probable spent more money trying to spite Yung than it would have cost him to pay Yung the asking price. Crocker had to build around Yung site, which cost even more money.
It goes to show what it can cost you to be pig headed.

What a story! I looked at the panorama, very nice. Then I google map street viewed Nob Hill. Definitely a nice place to live (note to self: must visit San Francisco sometime).

He was a jerk..I am thankful all my close neighbors are relatives. Can you imagine living there in the sweltering heat in the summer..with no breeze..thanks for the lesson..I enjoyed it:)

Amazing story - thanks for sharing this history with us!

this totally helped me with my history project. Crocker was a dick

Recently, I have enjoyed a horse racing accompanied with my friends and there the Horse Fence Calgary was literally amazing. It was by First Class Fencing. Durable, strong, protective and attractive.

Does the Yung`s house on Broderick Street still exist?

Nice sharing, Thanks for sharing this type of posts, How many peoples like this post? Please tell me, also Good News for you, SALES ARE BEGIN! get ready for buy abaya online in pakistan