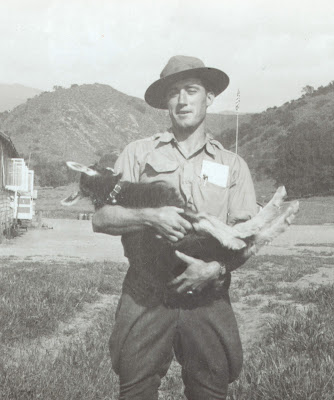 I really wasn't intending for a mid-week Animal-of-Mystery contest, but now you have me all curious as to just what this creature might be.  My grandfather was born in Neboville, Tennessee, and had both of his parents die within about a week of each other.  He didn't want to be bossed around by his four sisters, so he took off and made his own way in the world.  I know he worked a bunch of odd jobs until making his way to California, but I don't know what they all were.  I seem to recall him saying he worked as a forest ranger in Oklahoma in the fire towers, but this doesn't appear much like Oklahoma.  Perhaps he ended up transferring somewhere with hills.
Posted by Nate Maas at 3:25 PM

That's not a Kangaroo- it's a goat. And since the flag in the backgraound is an American one it's somewhere in the good old U S of A.