It seems as our boys get older, and life gets ever busier, there are fewer times we can enjoy extended times just as a family.  We just returned from a quick family vacation to Yosemite and things couldn't have been more delightful.  Every year, we've tried to squeeze at least one trip to Yosemite into our summer plans.  Of course it helps that it's only a four hour drive from our home.  As we just got home last night, I'll be posting more later.  Being a history guy, of course the historical aspects of the park are always on my mind too and it didn't help that a certain other website happened to be on a Teddy Roosevelt week right as we left on our trip. 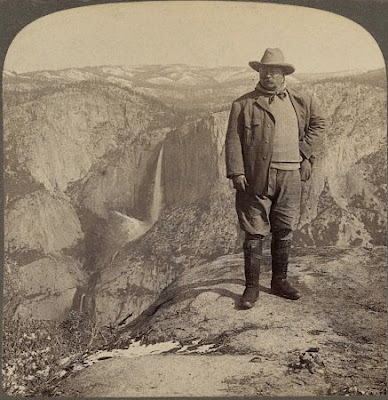 In case you were unaware, President Roosevelt made a trip to California in 1903 and camped at Yosemite starting May 15.  Fewer, I'm sure, are aware that Roosevelt made a quick stop in San Luis Obispo on his way to Yosemite, where he made a speech and toured the old Spanish mission.  For your enjoyment, here's the speech he made after stepping off the train, May 9, 1903:

A very inspiring speech for California.