George Santayana once wrote in, The Life of Reason, "Those who cannot remember the past are condemned to repeat it."

Recently, I was alerted by my readers to an apparent alarming development arising in West Texas.  Yes, my old nemesis, PJM, who for a time had seemed to have resolved himself to a life of quiet super villainy, has crawled out of his bunker printing libel on his blog and sending electrons of hate around the World-Wide Web.

If you've been following the Old Picture of the Day blog, you may have noticed his anti-Weimar Republic rant this week.  Perhaps you were like myself wondering why anyone would hold so much hatred for the Weimar Republic.  I'd like to remind my readers here that this was the short-lived parliamentary republic that fell between Imperial Germany and the Fascist State that followed.

Being a student of history, I started to think to myself, was there anyone else who expressed a similar distain for the Weimar Republic?  Then I recalled a little nut-job who ran Germany from 1933-1945.  Now, I know it's not popular to run around saying people are like Hitler, and just because both of them hate the Weimar Republic doesn't mean that they're identical, so let's look at the obvious differences between Der Führer and Die Nemesis:

Der Führer liked parades, thought his country was too crowded and needed personal living room, thought technology was vital for national glory, built laboratories for scientific research, published his thoughts in a book, marginalized groups he didn't like and called them "evil," felt an obligation to instruct the youth of his nation, feared Communism, believed that modern art was garbage, owned tractor-tanks, held a fascination with polar exploration, had a keen eye for personal attire, and wore a moustache.

Die Nemesis is not like this at all, he writes his thoughts down on a electronic blog not in a book.

So, I'd like to implore all of you not to worry about the apparent threats on OPOD.  To my knowledge things are quite normal in West Texas as PJM's classroom photo can attest... 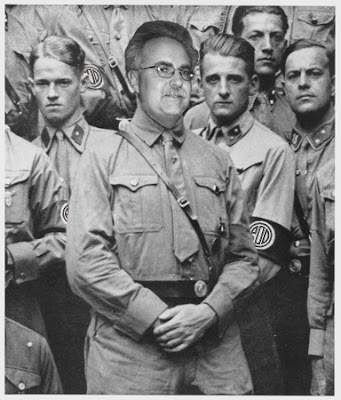 In unrelated news (see HERE), I don't know if you heard, but last year, the Russians had Hitler's skull fragment tested and it turned out that what they thought were Hitler's remains belonged to a woman instead, so the world really doesn't know what happened to him (or if he was able to have himself cryogenically frozen in order to reemerge at a later date like he claimed he would).
Posted by Nate Maas at 3:10 PM

oh no, dis ting is gonna heat up agin.

That should be PJMs new OPOD logo

Leave him alone! He is doing a good job on that site and you are the newbee!