Congratulations to Rob, who correctly identified the archaic practice of Thanksgiving Masking! 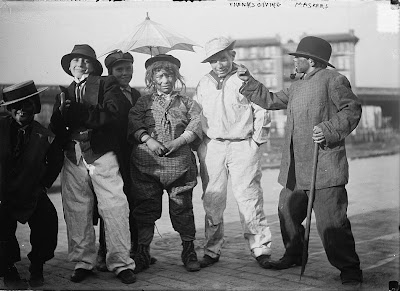 Before Halloween became the de facto dress up day (really only in the 1930s), many parts of our country saw children dress up in rags and masks to make them resemble hobos or ragamuffins (or occasionally crossdressing or in blackface too).  These kids were often called Maskers.  They would go door-to-door pretending to beg for food, treats, or small change. 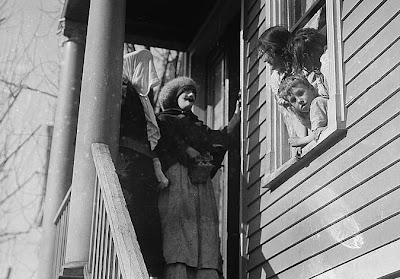 This practice traditionally occurred at Thanksgiving, but could also be found at Christmas or New Year's Day and was based upon an earlier practice where in groups of rowdy men (often tipsy) called Fantastics or Fantasticals, would dress up in rags or costume on holidays, parade in the urban cities (primarily in Pennsylvania and New York) and go house-to-house demanding to be treated.  At first it was nearly exclusively men, but over the 1800s, it became more of a kids' practice. 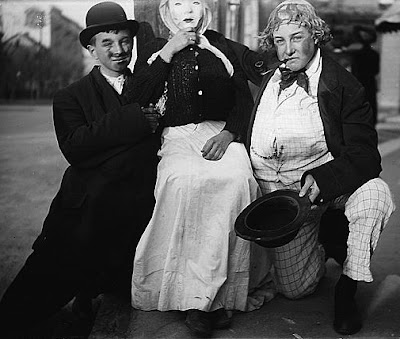 Encouraging kids to dress up in rags and go begging at other homes was considered bad form by the parents of the Progressive Era and the tradition began to fall into disuse.  When Thanksgiving became more of a national holiday as opposed to a regional celebration, masking dramatically decreased as Thanksgiving customs became more sanitized and standardized. 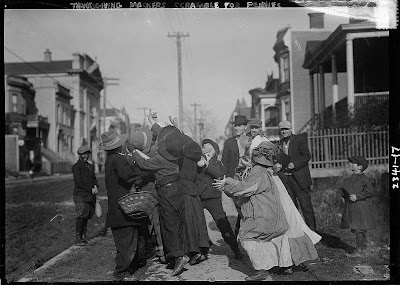 By the 1910s, Thanksgiving Maskers had pretty much disappeared although they continued to be found as late as the 1940s in Philadelphia and New York City.  Vestiges of the related practice can still be seen in Philadelphia's Mummers Parade. 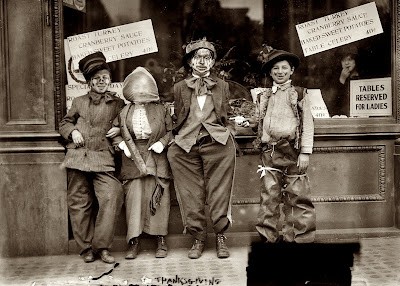 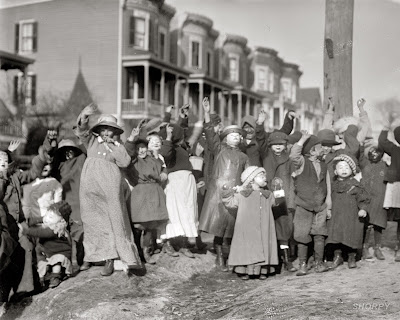 Thanks, Nate. I had no idea. Back in the before time, the Celtic holiday of Samhuinn, New Year in the Celtic calendar, took place on the cross-day between Autumnal Equinox and Winter Solstice when the gates between the worlds were down and friends and families were rejoined and everyone rejoiced. One of the beliefs was that debts also extended beyond the grave, so, if you needed to, you should disguise yourself from your creditors during the celebrations.

Or, if your celebrations might lead you into mischief, you might want to likewise go in disguise. The "Guisers" would go throughout the village performing their pranks, but, on the first day of the New Year, they would be delivering gifts, instead of mischief. Traditional gifts would be food, fire, and water as totems for a bountiful year to come. (Modern practices seem to combine the gifts into food and firewater)

It was great luck to be "first-footed" thusly, and the best of luck came from a dark haired man, the worst from a red-haired woman. I suppose those of us with "clear" hair would be neutrally lucky. Anyway, with the coming of Christianity, those practices were split off into Hallowe'en, All Saints Day, All Souls Day, and New Years Day. I thought they had emigrated long before the 1930's. Thank you for the history lesson.