Franksgiving (and the Republican Thanksgiving)

Yesterday's Person-of-Mystery was none other than a young Franklin Delano Roosevelt. 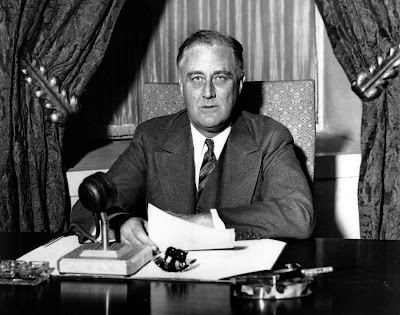 Did you think it was a girl in the photo? Young Franklin was dressed in Little Lord Fauntleroy fashion so prevalent at the time.

Here's another one I'm sure his mother pulled out whenever he had a date over... 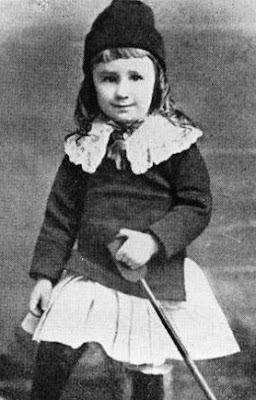 I figured the one of him on the donkey was too ironic to pass up (the donkey being the symbol of the Democratic Party).

So, what's FDR's connection to Thanksgiving you ask? 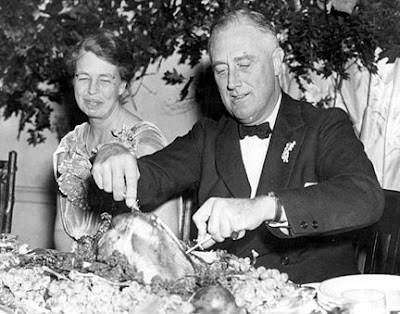 From the time of Abraham Lincoln to FDR, Thanksgiving was always celebrated on the last Thursday in November.  Most of the time, November has four Thursdays, but occasionally it has five.  1939 was one of those five Thursday years meaning that Thanksgiving fell later than usual, so Franklin Roosevelt, who was not one to follow pesky tradition, decided that he would by presidential proclamation move Thanksgiving a week earlier so businesses would have more shopping days until Christmas. 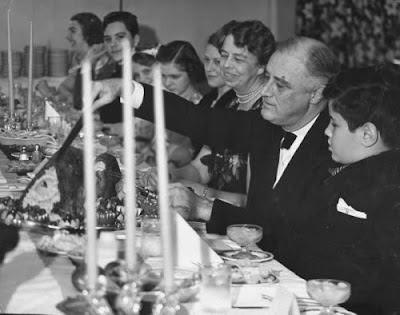 Unfortunately, he really didn't think through the potential unintended consequences of this action.  Many people were irate.  Thousands of letters immediately arrived at the White House, most of them indignant.  Smaller businesses were hurt because people now had time to wait and shop at larger retailers.  Schools had already scheduled breaks that now wouldn't align with the holiday.  Printers had already published calendars and now their goods were obsolete.  Football teams had planned games and now had to figure out whether to switch - some did and some didn't.  About half the states outright rejected the switch and chose to celebrate on the fifth Thursday.  This created problems for families living across state lines.  In some places people had November 23 off and in states right next door people had November 30 off, so some families couldn't be together. 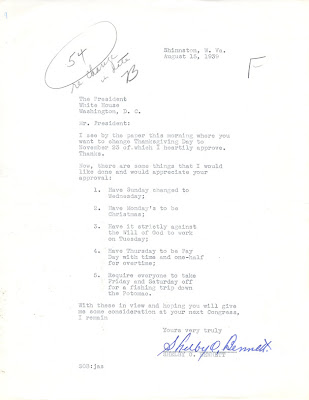 (sample angry letter to the White House)
Republicans were as a group upset, having fought him over things like packing the Supreme Court, they saw this as another example of executive impertinence.  Republicans out of principle continued to celebrate the last Thursday, so the net result was that you had one Thanksgiving for Democrats (some people called this Franksgiving) and another for Republicans.

1940 and 1941 saw Roosevelt declaring the second to last Thursday as Thanksgiving, making it those the only years that some celebrated on the third Thursday with about half the country continuing to celebrate the traditional "Republican Thanksgiving."  Some states like Texas and Colorado actually declared both Thursdays to be state holidays in these years.

In October of 1941, the House of Representatives passed a bill officially fixing the date of Thanksgiving as the final Thursday in November, but the Senate version offered a compromise fourth Thursday as the national date.  The compromise was agreed to and today all Americans, Republicans and Democrats, celebrate the fourth Thursday (even if some years there is a fifth Thursday). 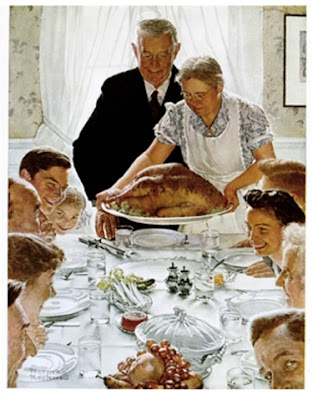 Superb post, we enjoyed each and everything as per written in your post. Thank you for this informative article because it’s really helpful, I really like site.
Please visit our website: @ Packers and Movers Kolkata

Thanks for sharing Such a valuable information.Im very thankful to You That You Had Given Me This opportunity to write on This blog.please visit our website I Assure You That it will be very useful for @ Packers and Movers mumbai

The TOP 4 Movers and Packers Pune are expert in their work. They offer top-notch and door-to-door moving services for your home, office, domestic, national or vehicle transportation. We have experience to handle and execute all types of relocation services. @ Packers and Movers Pune