The other day, Mathan posted a comment asking if I'd ever seen Japanese Pesos.  This is the money that was printed by Imperial Japan for use in occupied Philippines during World War II.  My grandfather was a supply officer on an aircraft carrier in the Pacific and brought home a small collection of bills that interested him.

(Japanese Half Guilder)
Perhaps you noticed, this blog has a number of readers from the Netherlands, so instead of posting a Peso, I've decided to post a half guilder from the occupied Dutch East Indies. 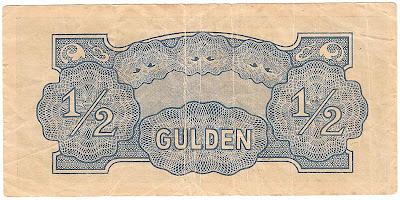 (Japanese Half Guilder - Reverse)
Posted by Nate Maas at 7:37 PM

How much was a 1/2 Gulden worth back then?
Is your spelling correct or is the spelling on the note wrong?

Guilder is the English translation of Gulden, both spellings are correct in their respective languages.

The Japanese occupation is a black page in Dutch history. ‘Gulden’ is derived from the word golden (initially the gulden was probably made from gold). I am not sure how much a 1/2 guilder would be worth in East Indies, but in Holland its present value would be about 6 dollar.

but today Japan is most powerful country in the whole world. they will never been occupated again, I'm sure

This blog is very informative and all the content about the market given here are useful. Homework Writer

how to find my apple id

Not Remember an Apple ID

Only a few blogger would discuss this topic the way you do.~,’;. usd to eur

To download aol desktop gold software in your system you can either connect with you aol gold support number or you can visit here: - https://www.customersupporthelpline.com/download-aol-gold-software/
aol gold download

Superb information. Thanks for sharing. I am a quickbook user and sometimes face issues using the software. The information shared by you proved to be really useful for me. sage phone number

Superb information. Thanks for sharing. I am a quickbook user and sometimes face issues using the software. The information shared by you proved to be really useful for me. QuickBooks customer care
sage support number

Really i appreciate the effort you made to share the knowledge. The topic here i found was really effective to the topic which i was researching for a long time.amanda fuller

The information shared by you is really worthy. Thanks for sharing .Keep on sharing similar posts in the future. sage support number
QuickBooks customer service number

Thanks for writing this simple and interesting Blog. It is very easy to understand. I am really inspired and want to appreciate your efforts. I found a huge content in this Blog which is very attractive and new for me as a regular reader. I loved it. Moreover, I liked the tips that you have shared in it. Please come up with new and exciting ideas as well as I can’t wait to read more exciting ideas from you.the mobilemaster

Rank your website on top of search engine through best seo services in gurgaon.

Rank your website on top of search engine through best seo services in gurgaon.

CBD dog treats are appetizing bites with the bonus of active full-spectrum, Happy Hemp CBD Dog Treats – 300mg product for your, that your pet enjoys and that contain clean, simple ingredients.

One Year MBA in Global Supply Chain Management (GSCM) offers a strong groundwork in Management Fundamentals and serious specialization in GSCM. It is a full-time private program.

I like your article. But if you want to Ease away stress and anxiety with our delicious CBD-infused Blue Rings Gummies!