Salmon Portland Chase was our Person-of-Mystery.  He's a bit of a historical asterisk as far as I'm concerned (although perhaps more appropriately he should be remembered as a semicolon, as I'll explain later). 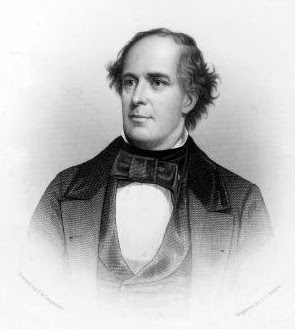 There are a few interesting things about his life.  For starters, his name – Salmon Portland.  He would sound more like a fish if the names were reversed, but I digress.  If you think Salmon is an interesting name, his father was named Ithmar Chase, but Ithmar died when Salmon was nine years old, so Salmon was actually raised by his uncle, Philander Chase (an Episcopal Bishop). 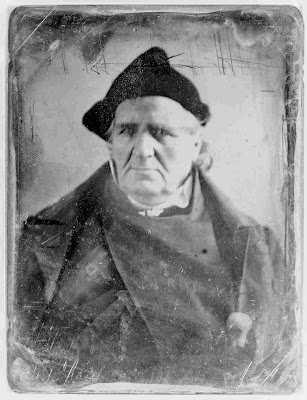 (Philander Chase)
Salmon P. Chase fit the early profile of a career politician, good schools, law school, and move to Washington D.C.  In 1830 he moved to Cincinnati, Ohio, where he continued to practice law.  Then in 1835, following the death of his first wife, Chase became more sincere about his religious faith and became involved in abolitionism and the defense of fugitive slaves.  Chase's position was that slavery was a state law and not federally supported, so if a slave left the jurisdiction of a slave state, he was then under the law of whatever jurisdiction he found himself. 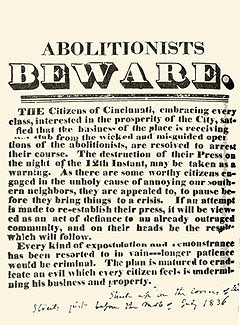 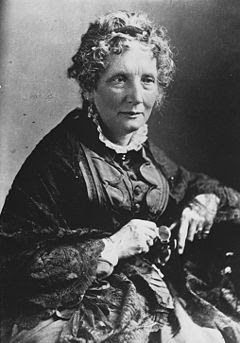 (Harriet Beecher Stowe)
Politically, Chase had a mercurial career.  Elected first as a Whig, in 1841, he became the leader of the Liberty Party in Ohio.  In 1848, he led the effort to combine the Liberty Party with the Barnburners and in 1849 he was elected to the Senate on the resulting Free Soil Party ticket.  By 1854 he was involved in trying to unite the Whigs with the liberal Democrats to form the Republican Party and was elected as the first Republican Governor of Ohio in 1856.  He was a nominee for President in 1860, but could not gain enough votes and eventually swung his support to Abraham Lincoln.  The same year he was returned to the Senate as a Republican, but resigned after three days to join the Lincoln Cabinet as Secretary of the Treasury.  Under his tenure, the first federal currency appeared, and Chase had his face put on the money in an effort to further his political career.  Although ambitious, he is also remembered for suggesting that "In God We Trust" be placed on our money.

(Chase on his $1 note)
Chase kept a diary during the Civil War years and his notes provide some of the best inside knowledge of the events around the Emancipation Proclamation. 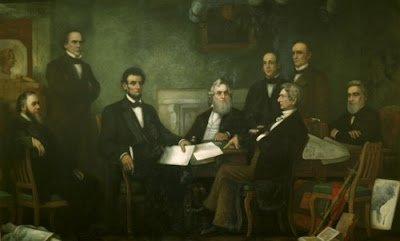 During his time under Lincoln, he continually tried to politically best Lincoln by thrice threatening resignation as Treasury Secretary.  Following the 1864 election Lincoln finally accepted his fourth threat, but to appease the Radical Republicans, he nominated Chase to be Chief Justice of the Supreme Court after Roger Taney died. 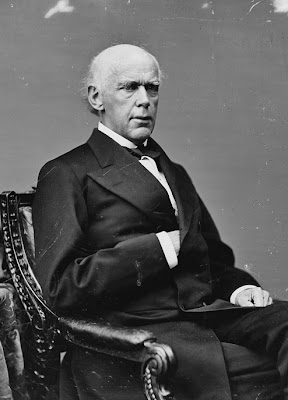 Chase made an attempt to gain the Democratic nomination for the presidency in 1868, but was again passed over.  In 1870, three years before his death he helped found the Liberal Republican Party.  He died in 1873 while still serving on the Supreme Court.

From 1929 to 1945, the United States issued high-denomination notes - primarily used in bank transactions.  Chase appears on the $10,000 note.  Starting in 1969, these bills were removed from circulation, but 336 $10,000 bills remain in circulation today.  I'm still hoping I accidentally get one in change sometime!
Posted by Nate Maas at 7:49 PM

We looked him up on Wikipedia last night - found it interesting that he designed money with his own picture on it to further his political career.

So interesting. My mother's maiden name was Chase & we can trace it back to 1630s when 2 brothers whose names escape me now (Aquinis maybe?)came over & settled Nantucket & Martha's Vineyard. Our most famous ancestor fought with John Paul Jones on the Bon Homme Richard. I've always wondered if we were related to Salmon.... & hoping we weren't related to Owen Chase (the true story that inspired Moby Dick - cannibalism & all).
We are traveling again (Tx to OH), so I missed the Saturday contest.

It seems that political parties had much more interesting names back then, like The Barnburners.

Rob, my favorite historic American political party name is the Know Nothing Party. Former President Millard Fillmore even ran for office in 1856 on this ticket and carried one state.

i heres you been sweet on my zarelda. yous bes stop dat now, hyar?

I suppose that Chase was one of the most prominent members of the new Republican Party before becoming Chief Justice buy term paper, research paper

He would sound more like a fish if the names were reversed, but I digress.
academic dissertation

Salmon P. Chase fit the early profile of a career politician, good schools, law school, and move to Washington D.C. lawn salwar kameez , ladies lawn suits , pakistani lawn collection , pakistani suits online , embroidered lawn suits , pakistani suits , lown dress , pakistani printed suits , pakistani lawn suits with chiffon dupatta , lawn clothes In 1830 he moved to Cincinnati, Ohio, where he continued to practice law. Then in 1835, following the death of his first wife, Chase became more sincere about his religious faith and became involved in abolitionism and the defense of fugitive slaves. Chase's position was that slavery was a state law and not federally supported, so if a slave left the jurisdiction of a slave state, he was then under the law of whatever jurisdiction he found himself.

Great info! I recently came across your blog and have been reading along.
mobile repairing tools