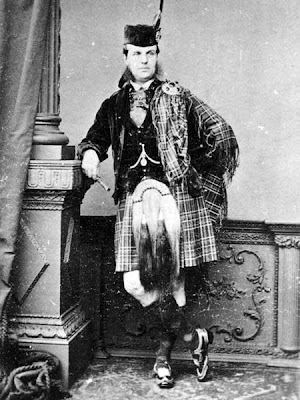 His early life is relatively unknown, some say he was Scottish, others English, and some say he may have hailed from North Carolina, but his first big con came in 1868 when using the title of Lord Glencairn, he took Marshall & Son jewelers in Edinburgh for £25,000.  In 1870, he fled England for the United States and began using the alias, Lord Gordon Gordon.

When in America, he continued his swindling first in Minnesota where his first ploy was to establish himself as a western investor.  He registered himself in a Minneapolis hotel and deposited $20,000 in British Pounds in a local bank.  Titling himself as Lord Gordon Gordon, he availed himself of Col. Loomis, the land commissioner of the Northern Pacific Railway, where fooled Loomis into believing that he represented the interests of his sister, and was in Minnesota to find a site to settle 100 Scottish families from his home estate.

Loomis spent $45,000 of the railroad's money on a two-month long lavish expedition and surveying of rural Minnesota, consisting of horses, tents, cooks, waiters, and servants, all in royal style, with Gordon being the guest of honor.  All the while, Gordon was inviting investors and speculators who were later defrauded.  Loomis explained the expense to the railroad board that Gordon was prepared to invest $5 million dollars into the development.

Capitalizing on his running Minnesota scheme, he left for New York, with letters of introduction including one from Col. Loomis to Horace Greeley.  On the train ride, Gordon became friendly with Mrs. William Belden, the first wife of James Fisk, and told her that he possessed an annual income of $3 million and upon reaching New York, Gordon was introduced to society by the Beldens.

Through the Beldens, Gordon became acquainted with Jay Gould, the famous robber baron.  Gordon told Gould that he held 60,000 shares of Erie Railroad stock and that he could manipulate the election of the board of directors in favor of Gould.  Gould at the time feared that he might be forced out as Director of the railroad.  Believing that they had become speculative partners Gould told Gordon to do what he needed to secure his position.  Gordon told Gould that his initial bribery on Gould's behalf had already cost him $1 million and that he'd need more than Gould's word to continue his plan.  Gould gave Gordon a combination of cash, stock, and bonds worth $1 million.

Gould soon realized he'd been had when Gordon tried to unload some of the stock below market price.  Gould enlisted the help of Boss Tweed and had Gordon arrested.  Released on $37,000 in bail paid by a another mark, Gordon presented a reasonable defense until addresses and names of presumed relatives could not be verified in Europe and former history of his cons back in Great Britain surfaced.  Realizing his scheme was almost at an end, Gordon fled the United States for Canada in May, 1872, and managed to leave Toronto just ahead of a British warrant for his arrest.

He next appeared at Munro House in Winnipeg, Manitoba, in late 1872.  Again fancying himself a Scottish Lord, he lived well off his ill-gotten gain.  When word of his unseemly past reached Manitoba it was disbelieved by local authorities who had good reason to believe Gordon's word over Gould and Tweed.  Gordon had informed Manitoban authorities that he was there to finance local development and that Gould was unfairly pursuing him.  Believing Manitoban authorities would not recognize the American warrant for Gordon's arrest, Gould had hired detectives to track Gordon's movements.  A plan was hatched to kidnap Gordon and bring him to Minnesota to stand trial.

After trailing him for some time, the detectives successfully kidnapped Gordon at gunpoint and made for the border.  Manitoban authorities were made aware of the crime and sent word to stop the abduction.  North West Mounted Police (now the Royal Canadian Mounted Police) caught up with the wagon carrying Gordon at Pembina, Manitoba (near the North Dakota border) and took Gordon's abductors into custody.

When rumors of the foiled plot reached America it was initially believed that the abductors were sized on the American side of the border and the Governor of Minnesota demanded their release.  When Manitoban authorities would not comply, the Governor ordered the mobilization of the Minnesota State Militia, thousands of Minnesotans volunteered, and President Grant authorized sending an army into Manitoba if a speedy release of Minnesotans could not be effected legally.

Initially insulted by American actions, and ready to defend their sovereignty, the more Manitobans learned of the former nefarious actions of the so-called peer of the realm, Lord Gordon, the worse the Canadian position seemed.  Eventually, the kidnappers were released with a slap on the wrist to avoid a potential military conflict.

Sensing that Gordon was planning on making an escape towards British Columbia from Manitoba under the ruse of a hunting expedition, Manitoba issued a warrant for his arrest and the Manitoban Provincial Police set out to track and arrest him.  They eventually caught up with him in Saskatchewan's Touchwood Hills.

Gordon was returned to Winnipeg, but with many of the public still refusing to believe the incredible accusations against him, he was granted bail.  Finally, the British warrants from his jewelry con caught up with him and detectives were sent to arrest him.  Gordon catching word of the approach of the British authorities, threw a lavish party and gave expensive gifts to the guests.  While at the party, arresting officers took Gordon where he expressed concern that they might travel through the United States en route to Toronto (apparently still concerned over American justice).  Gordon seemed eased by the news that they would travel east via the all-Canadian Dawson Route.  A seemingly calm Gordon got dressed but asked to put on warmer clothes for travel.  He distracted the officers by asking if they'd seen his tam o'shanter.  Seizing the opportunity, Gordon dashed for his bedroom, gabbed a loaded pistol he kept by his bed, and standing against the wall fatally shot himself through the head.  Thus ending the run of the "lord of the con."
Posted by Nate Maas at 1:50 PM

Ha ha! Fascinating story. So he was actually shamed in the end?

Good gravy! What a great story. Almost too good to be true. And it hasn't been made into a movie? Thanks for a good read, Nate.