Ah, the age old question, nature or nurture?  Are people born with their character or are people the product of their environments?  Did little Genghis Kahn like pulling the wings off butterflies from the time he was a baby or did act out because his classmates mercilessly called him "Lamest Kahn?"

Recently the science world was rocked by new evidence emerging from Africa that a person's character may be genetically fixed from the time of birth.  It had been previously assumed that nurture or a child's interactions through the developmental years may have a profound impact on their later development.  However, while many have sought Obama's birth certificate in Kenya, medical officials in that country stumbled upon and released what may be the earliest known photo of Super Villain PJM, now of West Texas. 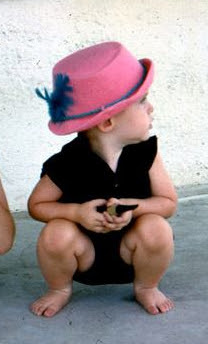 PJM as he appears in an undated file photo from Kenyan officials.

The photo shows the distinct profile of the criminal toddler mastermind, replete with outlandish headwear, dressed in black, crouched and at the ready to pounce on an unsuspecting victim with weapon in hand.  At first American observers were skeptical.  How could environment have so little influence on the development of a child over time? 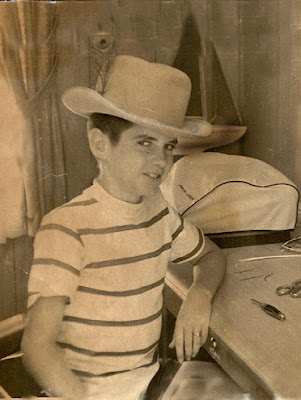 The brooding mind of a troubled young man – cleverly disguised penknife at the ready.

"When comparison is made with later photos, no other hypothesis than the 'bad seed' one seems to fit," said one bewildered professor at the now defunct Stanford School of Psychology and Human Behavior in Palo Alto, California.  A stunned Dean of the Harvard School of Psychology echoed the sentiment, "We had some good guesses about personality, but facing incontrovertible proof, I figure our program here is now headed the way of phrenology." 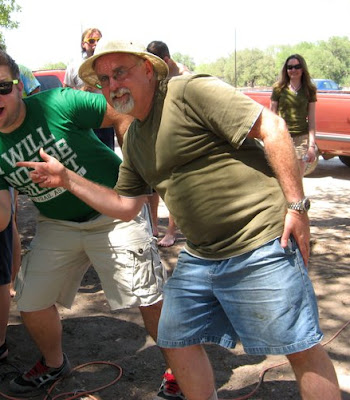 Hopes that people can change with age were quickly squashed when a reporter from the San Angelo Standard-Times noticed that he had inadvertently captured a rare photo of PJM just last summer.  "I was doing a piece on lack of mental health services in our county, so I went down to the river to see if I could get a personal interest angle on some poor fellow.  Anyway, there was a clearly disturbed individual in an outlandish hat.  When I went up to talk to him, he started calling for his 'henchmen' and when I got closer he reached for his pocket, but realizing that whatever he was reaching for was gone, he made a gun with his hand and started pointing it at me.  I obviously thought he was off his rocker, but when I saw that photo from Kenya, I knew that I had somehow survived a brush with a super villain!  It makes by blood run cold just thinking about it now."

Commenting with an iPad is touchy. Sorry I hit publish twice.

LOL! There is no greater source of scientific evidence than the genius Nate Maas. I just hope this prevents PJM from wearing that safari hat in public again. Unfortunately, my boss has the same taste when it comes to headgear. I dread the day they finally meet and start trading hats and old bluegrass CDs.