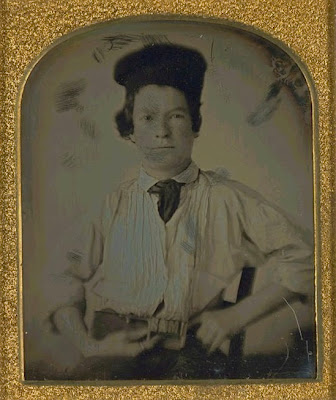 Congratulations to Dorion who correctly identified yesterday's Person-of-Mystery as Samuel Clemens, better known by his pen name of Mark Twain.

I thought I could throw you all off by posting an image of Twain before his mustache and bushy gray hair, but it wasn't to be.  This from about 1850 is an image of a young Sam as a printer's apprentice.  He's holding a composting stick with his name.  A composting stick was used to assemble the metal type before printing, but the type actually would be assembled backwards (readable in a mirror) so the result on the page would be correct.  The daguerrotype process produced a reverse image, so when his picture was taken, he knew that the reverse of his reverse name would be readable.

In any event, Mark Twain is one of my favorite authors and one of the few people I always enjoy re-reanding.  Does anyone have a favorite story/quote/novel by Twain?

I hadn't noticed that composting stick with his name before, that's a cool trick!

I told my kids the White Wash Fence story & now I am telling it to our grandkids. I know it's only a tiny part of Tom Sawyer, but it's a good story.

Since I am one of the people who know Roger/DADD, I sent him an email to make sure he is OK.

Yes, I am OK. Just haven't founf any posts to get excited about.
And I would have never guessed at Samuel Clemens on that one.
But it is nice to be missed.

OK, this is really late, but here is a Mark Twain quote I like:
"The truth is very valuable and should only be used when nothing else will do." (from memory)
Didn't trust my memory, found next version at
http://www.quotegarden.com/honesty.html
"Truth is the most valuable thing we have, so I try to conserve it." ~Mark Twain
Now, can I trust the internet? I also like the I'm My Own Grandpa extended quote you pointed out some time ago, Nate.