Bhutan is a remote and tiny nation of about 700,000 persons located between India and China in the Eastern Himalayas.  The nation was so remote, that until 1961, the only way to access the country from the rest of the world was to travel from India on foot to the border town of Phuntsholing and from there by mule or horse into the interior of Bhutan. 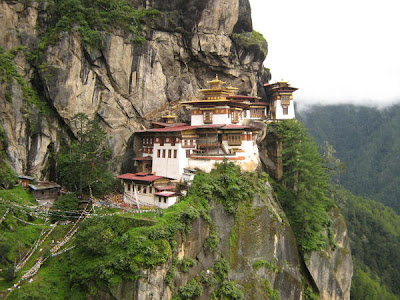 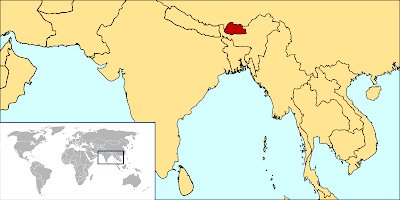 After World War II, the royal family of Bhutan sent the future queen, Ashi Kesang Choden Dorji, to study at Oxford University.  It was there she came into the acquaintance of a fellow foreign student, Burt Todd, an American from Pittsburgh.  Todd was an adventurous son of a wealthy steel and glass family.  Based on his friendship with the future queen at Oxford, Todd was invited to come visit Bhutan for the royal wedding, so with a couple friends he hitchhiked across the Europe and Asia and by foot and mule into Bhutan eventually became the first American to visit the country in 1951.  To give you an idea of how primitive it was, the king who married Todd's Oxford friend would be the one to introduce wheeled vehicles to Bhutan during his reign.  Todd was so taken with the country and its people, that after returning to the States and getting married, he convinced his wife to honeymoon with him in Bhutan in 1954. 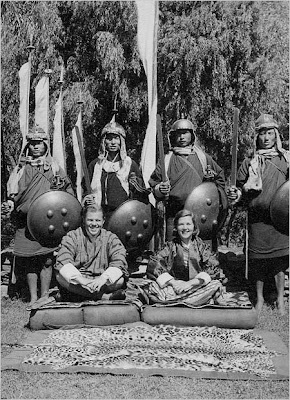 Burt Todd and Wife in Bhutan in the 1950s

Todd's wife, Susie, also fell in love with the country and they desired to improve the economic conditions in the kingdom.  Todd was retained by the government as an economic adviser and in 1962, under his suggestion, the nation printed its first postage stamps.  At first, sales were sluggish for stamps from a country few people recognized, but ever the entrepreneur, Todd hit on the idea of increasing sales by making the Bhutanese stamps unlike any others.  Todd traveled the world looking for new materials and production processes to create unique stamps for a fascinating country. 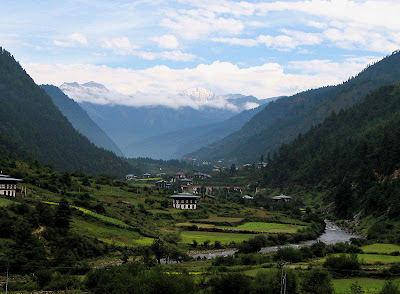 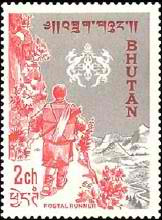 1966 was the first year that Bhutanese stamps really made a unique mark on the stamp collecting scene.  That year, a circular embossed gold foil series was issued and also a triangular stamp series featuring the mythical yeti of the Himalayas. 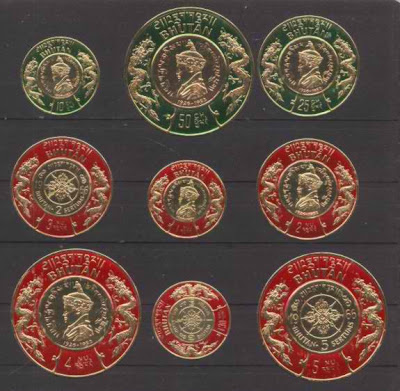 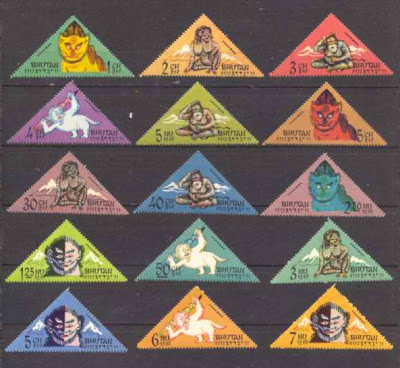 Bhutan issued the world's first lenticular stamps in 1967 depicting space exploration.  The stamps appeared to move and have depth as you rotated them, much like the prizes found in Cracker Jack boxes. 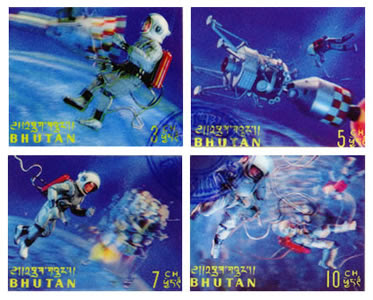 The world's first steel stamps (actually steel foil) were issued by Bhutan in 1969.  The designs were created by the Walt Disney Company and produced by the United States Steel Corporation (who Todd worked for). 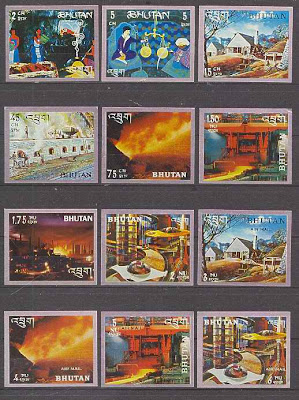 The world's first scented stamps were issued by Bhutan in 1973.  Rose oil was embedded below the top sheet and they smelled like the roses represented. 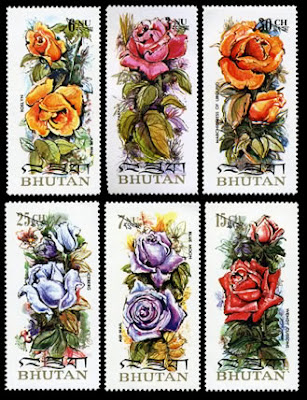 My personal favorites are the talking stamps also released in 1973.  They were a tiny vinyl records that could actually be played at 78 rpm.  The stamps held recordings of the Bhutanese national anthem, folk songs, or Burt Todd giving an oral history of the country. 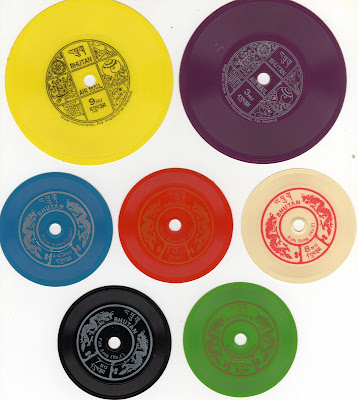 At its height in the 1960s, stamps were the leading source of revenue for Bhutan, netting the kingdom $500,000 annually and have provided the nation the money necessary to build an airport, hospitals, roads, and electricity.  Bhutan continues to produce stamps, but also receives tourism revenues also largely due to the increased visibility brought by the unusual stamps.  In 2008, Bhutan fused its stamp program with a tourism push by producing the world's first CD-ROM stamp.  The stamp was a disc containing a documentary about the country and celebrated the 100th anniversary of the monarchy. 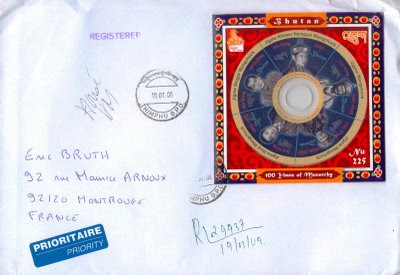 I can't believe the things you have taught me! Once again....Thanks, Nate!

I have never heard of Bhutan until now. Very Interesting:)

"Hey, you have to add more stamps, moron"

Hello to all my viewers my name is Maria Cullen from Wisconsin USA I want to use this opportunity to thank Dr clement who gave me win number to win euro million the sum of $2 million dollar .thanks you once again Dr clement. for helping me to win the euro million.I have been playing the lottery for the past 5 years now and i have not be able wining then i was so upset and i need help desperate to win the lottery so i decided to go online and search for help then i saw so many good testimony about this man called Dr clement how he gave lucky wining number for many people to win with help of his spell.then i dis-said to contact him also and tell him i want to win a lottery number too, he also cast wining lottery spell for me which i use too,then i play and i won $2 million dollars.I m so grateful to you Dr clement i we for ever reaming loyal to you word. God thank you for send Dr clement to me as my helper.just in-case you also need lottery win number email him to help you win any kind game you want he can help you, is nice man you can contact him through via allmightbazulartemple@gmail.com whatsapp +2347051758952.and Dr clement he also explain to me he can cure any kind of disease with herbal medicine as follow, {1}HIV/AIDS {2}DIABETES {3}EPILEPSY {4} BLOOD CANCER {5} HPV {6} ALS {7} HEPATITIS B OR A {8}LOVE SPELL {9} herpes simplex. (10) Ex back

Nice sharing, Thanks for sharing this type of posts, How many peoples like this post? Please tell me, also Good News for you, SALES ARE BEGIN! get ready for abaya collection in karachi

My wife of 4 years broke up with me because I was broke but I never told her I was playing the lottery because I wanted to surprise her whenever I win a huge amount. I was so heart broken and I decided to seek help from friends and family before I saw a post of RUTH BREEN about a man called LORD ZAKUZA saying how he helped her win a lottery worth ONE MILLION DOLLARS. I contacted Lord Zakuza via WhatsApp  +1 740-573-9483 and explained my situation to him. He spoke to me like a father and told me he was going to prepare a spell for me to get my wife back and also give me numbers & where to play the lottery. I did everything he asked of me and within 48 hours, my wife came back to me seeking forgiveness and I was called 4 days after that I was the winner of 383 MILLION DOLLARS from the lottery I played. I have never seen such a miracle in my life. No matter what you are going through, there's always a solution. For more info, WhatsApp: +1 740-573-9483 or Email: lordzakuza7 @ gmail . com or visit his website: https://lordzakuzaspells.com

I have always dreamt of winning BIG in the lottery. I surfed the internet for help to win the lottery massively and I was directed to the DR Amber website. I had a chat with him about what I needed and he assured me that his spell will make me become a lottery winner. He got back to me after 3 days with the numbers that I needed to play the lottery and told me to believe in myself. I felt enveloped by the control of the spell. I took his words and played the Mega Millions Lottery. Two days later, I was sent an email that I've won the sum of 107 Million Dollars. I was shocked and couldn't believe what my eyes were seeing. Immediately I was given the cash prize, I stopped working. I want to say a very big thank you to DR Amber for helping people like us who really need help. Now I know that there's absolutely nothing too hard for DR Amber to do. To get in touch with him, email : amberlottotemple@yahoo.com or click his webpage URL___ amberlottotemple.com