It probably doesn't come as news to many since it was picked up by the associated world news organizations, but I figured I'd repeat the story here in case you missed it, but last Thursday, researchers from the Van Gogh Museum in Amsterdam declared that a painting, "Still Life with Meadow Flowers and Roses," in the Kröeller-Müeller Museum, Otterlo, Netherlands, formerly believed not be a Van Gogh was indeed a work by the painter. 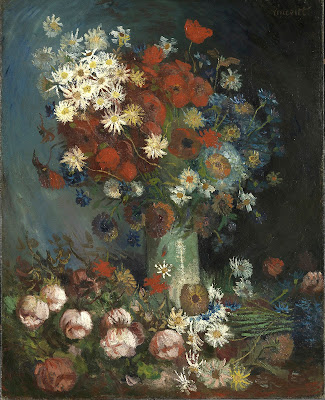 The painting was purchased by the Kröeller-Müeller Museum in 1974, but skeptics pointed said the composition was too busy, the canvas was too large, and the signature was in an unusual location, so the painting was removed from their Van Gogh section and displayed elsewhere.

In 1998, the painting was subjected to X-ray analysis and it was revealed that there was an image below the visible one, but this last year, an even more detailed X-ray was taken and it clearly shows an image of two wrestlers. 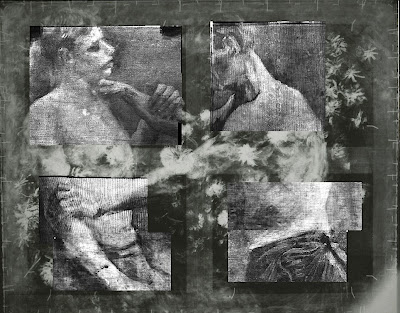 After more closely examining the underpainting, experts are now convinced that the strokes and pigments used in the wrestlers match Van Gogh's style.  Experts can place the larger canvas at Van Gogh's time in an Antwerp art academy where he studied in 1886 and the image corresponds to a letter between Vincent and his brother Theo where mention is made of the two wrestler image.  So, for now, the case is closed and the still life has been returned to the museums' Van Gogh section.

How interesting. I saw that headline, but neglected to read it, so glad you brought us up to speed.

The heck you say, very interesting. I like the still life better, no matter who painted it.

So basically the artist had recycled the canvas by painting over top of the wrestlers?

The style of the original work under the flower painting is clue enough to identify the artist. Cool.

DADD, the still life is nice, but I think the wrestlers may have been an art school study and not a finished work.

Mike, yes, it was fairly common for artists to reuse canvas for later works. It's strange living in such abundant times that people would do this, but particularly since the earlier work was just an art school study, he probably didn't want to waste a nice canvas on practice.

Van Gogh is my favorite painter. I don't like this painting. Anybody could have painted the flowers on top of the wrestlers and left the signature where it was.
Pleased too read 'for now'.
Bravo on technology though.

When I heard this on the radio I thought: anybody can read those letters, so for me the evidence is not that conclusive. I must soon visit the Kröller-Müller though, it's high on my to-do list (and only 20 miles away from Amersfoort). It's strange to realize that so many people around the world seem to know Van Gogh, Mondriaan and Escher.